World Cup Fever as I like to call it has struck the Bungalow. Well, as much as World Cup Fever can hit a bunch of typical Americans. As most know, Americans just aren't really into soccer; as we call it. Yes, I know, it's football. If you say football to an American though you are going to be met with questions about first downs, touchdowns and receptions, not penalty kicks, goals and corner kicks. Sure, we have youth and high school soccer teams, we even have a professional league, but as a collective Americans don't pay attention to soccer. 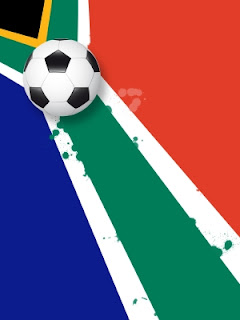 The first game that England is playing in the World Cup is against...tadaaaa...the USA. Of course the first time the US plays against England since 1950 I would be living here. LaLa today came home talking about the last time the US played England that the US won. I really didn't believe her. I mean come on...really? I had to look it up. And yes, it was true. Even when it happened back then people thought it wasn't a joke or misreport. In fact it only made the news in one newspaper back in the United States (yep, that's how excited they were about the victory).
On Saturday after KiKi's birthday party (yes, she is turning four!) we are headed over to my friend's house for a World Cup barbeque. They are England supporters of course. Another American family will be in attendance; most likely supporting the good ol US of A. Me? I am on the fence. Yes, I hope my countrymen do well. I have a hard time having an emotional attachment to the team though. I don't know any of the players (remember I have very little footy experience to draw on here-though I hear some of them play in the UK). So, I figure I will support England. At least if I support England I will know the name of the coach (Fabio Capello) and players (though don't ask me what position Wayne Rooney plays...). The final thing that made me decide to hang my hat on England, at least their country gives a damn about football.
photo credit: Photographer: Salvatore Vuono
Posted by Kat at 10:21 AM