Just Around The Bend

When my family comes to visit me here in England it is always an adventure. Sometimes it becomes a comedy of errors and other times we find things to explore in my little area of England that I didn't even know existed. This time my parents are here visiting. This is their fourth trip to England since I have moved over here, so I don't feel the need to do the touristy bits with them. In fact, today I dropped them off at the train station so they could make their way to Bath for the next few days.

On Saturday there was a bit of rain, but once it cleared up it was a balmy 70F outside with just a bit of a breeze. We decided to go feed the ducks down in the town close to my house, which could have turned out really bad considering KiKi's last encounter with the ducks. Let's just say she ended up pinned on the bench next to the river with about 200 ducks swarming around her and looking at me with pleading eyes said "Can we go home now?" She was a bit traumatized. So, on Saturday when we mentioned ducks, she balked for a second and then decided that she would go because her PaPa (grandfather) was going.

We ended up having a fantastic time. The girls fed the ducks without incident and we decided to walk down a path that takes you to the next village just to see what was around the bend. We ended up next to a little pond that I guess has formed from the overflow of the river. The female ducks had taken this pond over and there were ducklings galore for the girls to fawn over. A few male ducks were in the pond and made a spectacle out of themselves by fighting over any little scrap of bread that the girls would throw to them, sending the girls into fits of giggles. 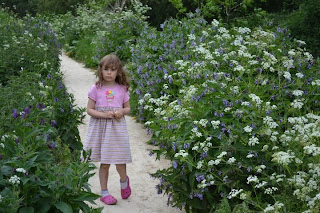 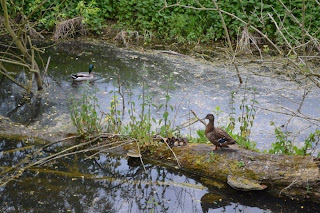 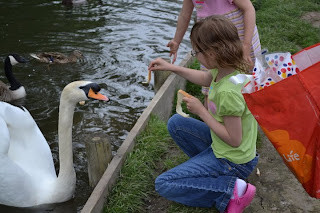 This just goes to show you, that sometimes the best adventures are right outside your front door.
Posted by Kat at 1:26 AM