Wordless Wednesday- Her Dad So Proud 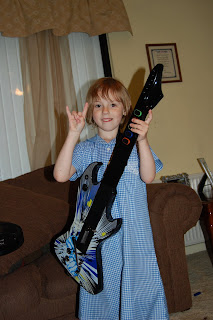 I wanna be a roccckkk star.

You know what? I'M so proud!!!! She is too much! That guitar is almost bigger than her. :)

That's awesome. She looks so hardcore.

I think the lack of comments may be Blogger's fault. Yesterday my blog flipped between yesterday's and the previous day's post, and today I notice your Wednesday post isn't showing on other people's blog lists.

Looks like we have the next Sheryl Crow on our hands here.

I was gonna say Courtney Love but that would be baaaad...very very baaaad.

My son (11) took lessons for a little while and he used to play the opening chords of Daytripper for me and I was in heaven. Then he quit...broke my heart!

Oh, so ghetto. Especially the outfit.

Has she grown 2 feet?

The next Guitar Hero!

So was she singing kumbaya while wailing? or was it "The song that never ends"?

Either way she rocks!

Great to see Rock n Roll will live on with the next generation!

For those about to rock, we salute her!

So do I, who has been known to bust out a little Guitar Hero for, um, yeah, seven straight hours...

Rockstars of the world unite.

I have a little something for you at my gardening blog. Stop by to pick up your award.

and she is SO dressed for the part!

it's like Little House on the Prairie meets Guitar Hero! AWESOME.

She knows all of Metallica's songs, doesn't she?

PS. I've seen a few people bitching about Blogger problems today so you're not alone.

PPS. I didn't mean to imply you were bitching.

Very cute. I want one of those.