...And Then I Fell Over From Exhaustion

So did I tell you this move consisted of me, The Man, a whiny 3 year old and a truck?? Yep, that was the entire moving crew. Also, if you were following my tweets on Wednesday you would have seen that the new owners of the old house were also building a fence at the house while we were moving. Let me tell you how awesome that was! It was so awesome that they were in our way, cluttering the driveway with their work van, saws, jackhammer, wood, bodies, and suck-a-tude. Oh they kindly left some panels out of the fence so we could move the couch. So helpful of them...Bitter? Me? Nooooo.
Now, we all know I have this thing about spiders. The thing being I bloody hate the bastards. So, when we left the removal of things in the garage until 6pm (dark here) (and a stroke of brilliance on our part) (like I needed more blogging material) we should have known that the creepy crawly icky icky poo poo HUGE spiders would be out en mass! Did I mention that The Man is more afraid of spiders than I am? The process consisted of spinning a box around and out of the garage, screaming, squashing a spider and then doing the "get it off me" dance....for the better part of an hour. The best part is when I would gasp and he would yell "Where is it?" and start bobbing and weaving to make sure it didn't get on his head. Sometimes I would gasp just for fun and then say, "Oh, nevermind it's just a shadow." (I am giggling now as I write that)(cause I am evil). It was pure comedy gold.
What wasn't pure comedy gold was the muscles that I didn't know I had aching for days. Moving heavy furniture is not for girls. The 9000 pound chest of drawers we have was pure murder on my back. Don't even get me started on the couch that didn't want to fit through the kitchen door into the living room. The door had to come off the hinges for that one. Oh and the letting agents, well you know how useless they are.
BUT, the joke is on all of them. This is the view I have out my kitchen window! 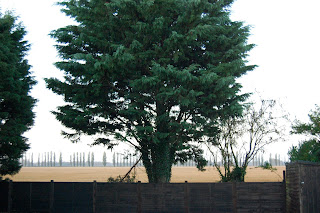 It's good that your husband hates spiders as much as you do. At least you don't get "the look" when you scream and freak out. My husband CATCHES the things and lets them go outside. Even big ones. And a few months ago he got bitten, and was like, "oh well." Ain't no "oh well" about it! Crush those suckers! :D

Moving is awful. But that view should make up for it! Congrats on doing it, enjoy unpacking the boxes. x

Congrats on finally being in the new place!!! Hooray!!!!

(and spiders are the effing worst! Did I tell you that a friend here warned me that they like to get inside of coats, so watch for them when we put our arms into the sleeves over the winter?!?!?!? If that happens to me, I will scream so loud I swear you will hear me from there.)

Oh, I hate moving! It is the worst experience. Especially when stuff does not fit through the door.

Boo to spiders, moving and sore muscles and new owners of old houses. Yay to the view!

'Moving heavy furniture is not for girls'.

Now my back hurts...ouch. Glad you survived, even with the spider dance. Oh, and loved the line "...bloody hate the bastards." Going native quite gracefully!

This girl does not move heavy furniture unless I'm rearranging the LR or something.
Fortunately, Mr. HH and I are not scared of spiders. I say it's fortunate because they are bloody everywhere in Germany. OMG, all over the house! The amount of spider webs in our house on a daily basis is staggering. You'd think I never clean (let's be honest, it's not exactly high on my list), but hey, I just left them alone for Halloween. Free decor!
Indy is petrified of spiders. PETRIFIED. The screaming and yelling and drama. Oh dear. We have to 'rescue' him on a daily basis. Snakes, rats, mice? No problem. Spiders? Ahhhhhhhh!
BTw, I love that you fakes spiders just to watch your dh jump around. I would totally do the same.
Love your view! Still waiting for photos of the new Bungalow!!!

Have been putting off cleaning the basement for weeks because I don't want to deal with the spiders that I'm sure are lurking there! Hate moving too, but it's always satisfying when everything is put away and I can look at redecorating to suit me!

I hate hate hate spiders, and moving, and snakes (yeah I know nothing to do with your post but I do really hate them).

I do love your view though. Send more pictures. I haven't painted anything from England.

Moving sucks ass, and is never complete without someone hurting themselves first.

I think the spiders are out because they are coming inside for the warmth.

I know they say "War is Hell," but so is moving. Glad you've gotten thru the brunt of it. Love the image of the 2 of you dodging the spiders!
Welcome Home!

Bee-u-tee-ful view! It's worth it right?

Okay maybe I'll ask again in a few days. Spiders. OMG don't even get me started on those evil evil things.

Ohhhhhhhhh it is beautiful! You know, if me, Bobby and KK were there we would have totally squished spiders for you...well, actually, Bobby would have been trying to rescue all of the spiders...he is into bug rescue. My motto is "If the shoe fits [over the bug] squish". We would have also assisted in couch direction, box organization, as well as beer consumption. We are EXCELLENT supervisors!

P.S. Radio One has become a staple in our house. It is all Bobby listens to now!

What an ordeal. I can't imagine why the new owners couldn't hold out a smidge longer so you could get out of their way completely. Glad you're getting settled in your new home. That view is a rewarding one!

Great view. I have a large tree outside too, but it is so close it's blocking my sewer pipes and costing me a fortune. Don't get me started.
Good job on the move though! And for god's sake both of you - get a hold of yourselves. It's England - how bad can the spiders get???

I've moved on my own and that sucked. Last time we got movers and that sucked too. Conclusion: moving sucks. When they develop telepathic transportation, I'm signing up.

I hate moving too. I luck out though because I have a bad back I get to just stand and watch other people move my stuff.

Nice view! I'm glad you survived the move, now is it time to unpack?

I'm sure The Man is happy that you've shared his fear of spiders and his dodge and weave dance.

I was big pregnant last time we moved and now I never want to move again. Or be pregnant. Alas, I will most likely do both.

My fiance is also terrified of spiders, which always loses him many many man points in my eyes when he runs--nay, prances--squealing from the room begging me to kill it, kill it, please god kill it. I swear other than that he is very strong and manly.

What a gorgeous view!!! I'm feeling a little jealous here.

WHAT a beautiful view! Lucky lady!

While I myself don't have anything more than a natural aversion to small spiders, the big ones scare the BEJEZUS outta me! My grandmother was one of those that didn't believe is killing spiders "because they are predators." She would also capture them and release them outside. And the Heavenly Father HIMSELF couldn't help me if she caught me killing one! So, I have a rule...if I see one outside in ITS home, I leave it be....if a spider has the nerve to come into MY home, it's gettin' skooshed. My grandmother is aware of this rule (I wasn't afraid to tell her since she lives in Virginia and I live in Florida...SAFE!) and I've told her that she needs to be prepared for all the busted-ass spiders I've annihilated over the years to be waiting on her outside of the pearly gates to tell her what her granddaughter did to them!

I hate moving but I hate spiders even more. Glad you finally got all moved - now the fun begins to get settled in. And that view? Pure awesomeness. ;)

There is an old saying that goes something like this.... It tis better to burn your house down twice, than to move it once!

Your blog post made me smile, then made me laugh. I really enjoyed reading it. Thanks for sharing your moving adventures.

Oh I hate moving. I usually get hubby's mates to help in exchange for beer and pizza, but I end up doing lots myself.

And spiders? Don't get me started. I hate the ruddy things.

I've been in my house for 20 years. I don't even want to THINK about moving. My crew would consist of me, maybe my daughter and her boyfriend (she lives an hour away so who knows?), my son who is in school 90 minutes away, my 18 year old daughter who is in school 5 hours away and John who is 57 and recovering from cancer. Besides John and my youngest hate each other and won't be in the same vicinity together. Talk about blogging material! The weird thing is, the one person who would most likely be there is my ex-husband. But he better not bring that bitch he married or someone will get hurt! Oh yeah... blogging material.

Excellent! Love the spider dance, I do that frequently. The new house has the most amazing views, lucky you