On Saturday we had a busy busy day.  LaLa had swim class at noon (the child is half fish I swear) and then afterwards we attended the schools main fund raising activity, the Summer Fete.  For the Americans, a fete is like a fair with no rides.  It had games for the kids to play, a face painting booth, a dunk tank (which many teachers fell victim to), a rummage sale, and demonstrations put on by various community groups.  There was also a burger van, donut van, and an ice cream truck. 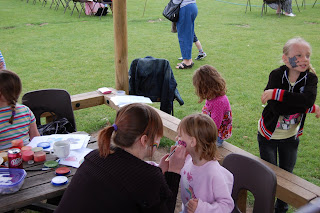 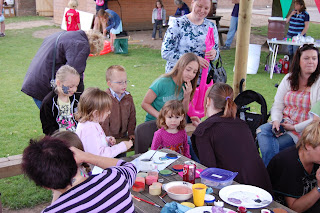 We started the afternoon at the face painting booth. 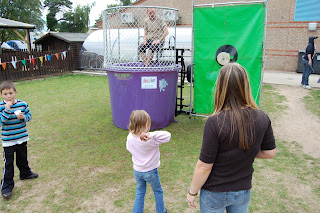 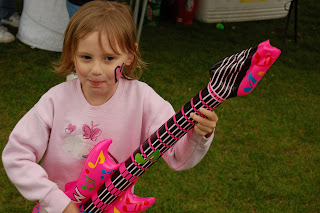 LaLa won a pink blow up guitar from the test your strength booth (everyone won)! 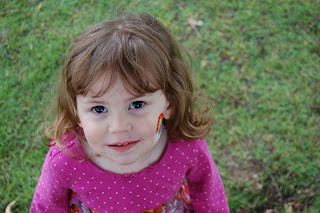 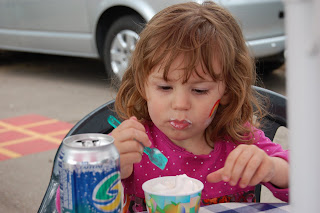 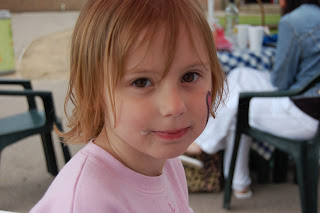 Ice Cream enjoyed by all.  Oh and it was sooo yummy.  British soft serve ice cream beats the crap out of American ice cream.  It is light and creamy and mmmmm.  Oh and it van that serves it is called Mr. Whippy and if that isn't a reason to love it, I don't know what is!
Posted by Kat at 1:40 AM

Blow up guitars. Mr. Whippy and a donut van! Who wouldn't like that? Looks like a good time was had by all. And I want a donut van...

Hey-I see other moms with jeans on in this picture! They're allowed to 'dress down' for fete's?

I think im the only person who does not like Mr Whippy , im not an ice cream fan full stop but that stuff makes me heave.

Looks like everyone had a great time! And I want that ice cream!

We had events like this when I was kid (like 800 years ago). It is nice to see that some schools still do and it looks like it's still fun. Ice Cream, nom nom.

That looks like a lot of fun! I want a fate of my own! And face paint! I want Fate Paint!

Sounds like a great time, and I'd take a fair without the rides anytime (they just make me sick).

What a fantastic fete! I would love to get the kiddos out to do something fun like that! Mr. Whippy sounds sublime!

Your kiddos look adorable! They look like they were having a really fun time!

what a fun day and that guitar is awesome.

I've always wondered how to pronounce "fete". It's such an awesome, *classy* word, but considering I say things like "booyah" and "fer sure", I doubt that I'll be using it very often.
Cute pics!

I always thought it was 'fet' as in Boba.

Mr. Whippy. It's been a long weekend and I'm tired. I feel like I should be making a joke about this though.

Oh, how I wish every school fair or fete was like the finale of Grease, where this is much dancing and singing and glee. Hell, I'd even buy extra tickets for a ride on a flying car!

I would also pay extra for Mr. Whippy, too. Anything that's ice cream or in the ice cream family, for me, stops me in my tracks!

A fair? You mean a fayre?

Mr Whippy ice cream is not ice cream - it's margarine. Nasty stuff. Give me Haagen Dazs any day.

Whatever you do, don't get any family members hooked on the garbage we sell as ice cream, unless it's genuine Cornish and made with cream, rather than denatured vegetable fat.

mr. whippy, huh? Is there a mrs.? Oh and what kid thing is complete without face painting?

I swear the only reason (not really) my kids want to come to England every summer is for the Mr Whippy 99s.

I remember soft serve being so much more delicious when I was a kid.

Please tell me you learned to pronounce fete the hard way.

*imagining you saying; are you going to the school fete (as in cheese)*

Fete can sometimes be smelly.