This is a sponsored post. I was provided a Nokia N8 handset in order to complete this review.

When I was approached by Nokia to review the Ovi Maps software I jumped at the chance. I am a bit of a phone geek and love fiddling with new technology. I was completely excited when I got my BlackBerry Storm a couple of years ago and truthfully have really been let down by that phone. I wondered how the Nokia N8 would stack up against the my BlackBerry and the iPhone 3GS that belong to my friend that I have played around with. I have now been using the Nokia N8 for roughly a month and I am extremely impressed.

First of all, I would like to say that I love the slimness of the Nokia N8 in comparison to my BlackBerry Storm. It feels more like a phone than a brick in my hand. However, it doesn't feel flimsy and is quite sturdy and has held up to the amount that I tend to abuse my phone. The smoothness in the touch screen transitions was also superior to my BlackBerry. I also liked that the phone vibrates as I touch the screen to let me know that a key has been pressed. I found with the BlackBerry touch screen I had a tendency to "fat finger" the letters as I was keying in words. I have had a lot less of an issue with the Nokia in respect to that as well.

I like the functionality of the email and web software on the Nokia N8. The texting screen is also easier to read than that of my Blackberry because each line has an underline. I have found that it is easier for me to keep track of what I have read or what I am writing with the underline under the text. Think of it like using lined paper when you are writing a letter. Although, Nokia sent me an international sim card to use in the N8, I couldn't figure out how to get it work so I switched out the sim from my BlackBerry in order to test the call and text functionality of the phone. I found that the antenna on the Nokia is a lot stronger than that of my BlackBerry and I get better coverage from my provider on the N8. Also, the speaker quality on the handset is also nice.

I really like the camera on the N8 as well because it is easy to figure out. When held sideways the camera functions just like any hand held 35mm digital camera. There is a zoom feature and a shutter button. The 12megapixel camera takes good quality photos and there is a flash built into the phone for night time photos. I transferred by photos easily to my MacBook using bluetooth. 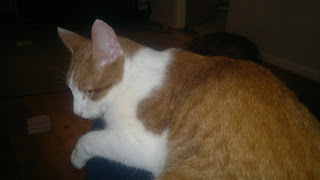 The Ovi Maps software (which is free for Nokia users in the Nokia Ovi Store) is really easy to use. I have used it instead of my SatNav to navigate while driving and also to find locations by foot. I also like that it will help you find points of interest, restaurants and events happening in locations. It is especially nice to have a back up to my SatNav, which I often forget at home, since I am not originally from England and sometimes get "misplaced" when I am driving. I especially like the different ways that you can view the maps on the Ovi Maps software. You can view them in Map view, Satellite view, Terrain view. You can also view them in 3D, add landmarks or in night mode (like when it becomes night time and your SatNav goes to the black background w/the colored lines to make it easier to see in the dark). I have honestly found the Ovi Maps software to work just as well as my expensive SatNav in giving me turn by turn voice directions.

Another feature on Ovi Maps that is really nice is that you can record and upload your own voice or your kid's voice to give you directions. There are also a lot of other voicepacks in various different accents to pick from to give you directions. My favorite so far is the pirate voice. Who wouldn't want to have a pirate give them directions? It is much nicer than that bossy lady on my Garmin SatNav who gives me directions now!

For those who are looking for a touch screen smartphone I highly recommend the Nokia N8. It might not be as hyped up as a BlackBerry ,iPhone, or Andriod, but it has great techie features like the ability to connect it to your home theater using an HDMI cable, watch on demand WebTV (BBC iPlayer, CNN, E!, and National Geographic come on the phone), download music, download games and applications from the Ovi Store, or record HD videos. I just can't see myself switching to an iPhone now like I had intended. I have been converted into a Nokia fan. I hope Steve Jobs doesn't find out.
Posted by Kat at 12:00 AM

Sounds awesome!! I'd be dead without a smartphone. :) It's nice to hear someone rave about something other than the iPhone, too.

Great review! I must confess that I have not heard of this particular phone. I have an Android...the Droid 2. So far I pretty much love it. Smartphones are the bomb for sure!!
Hugs
SueAnn

I am so grateful for your post and to discover your blog! ... My 5-year-old Treo 650 was just about past it and I decided early December, after much debating, to opt for the Nokia N8 -- which was free with a £25 a month deal with T-mobile. It has taken me a while to become comfortable with all its bits and bobs, but I do agree with what you have said. I too was tempted by the I-phone, but I think I've just as good a deal and a much better camera to boot. I also considered the Blackberry Torch -- but thought the keyboard would be just about impossible to use. Though I'm still getting used to the touch keyboard and do miss the one on the Treo.

i have a cat JUST like that. She is called Orlanda. She was Orlando until the vet came to pick pockets that were not there.

I don't have a Nokia N8 though.