Ok so yesterday I unleashed my rant, but today I will tell you a funny story. When my parents were here we went to Windsor Castle. If you are planning on visiting the UK, this should definitely be on your list of places to visit. Not only is it still an active royal house, but it is also a architectural gem. Towers, moat? Yeah, it has them. It was amazing. I am not just saying this. 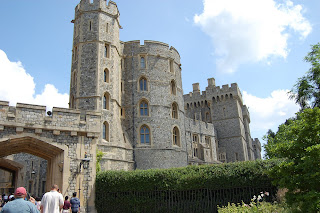 So after we had taken in the castle we (my parents, husband, the girls, and I) decided to take in the rest of the touristy part of Windsor. They even had a McDonalds (score for my girls). 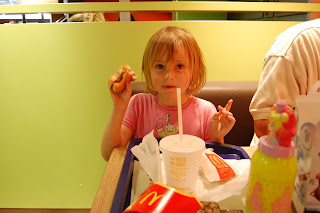 We didn't just eat a McDonald's though. After we were completely spent and running on empty we wandered down a street and ended up at this little hole in the wall of a bistro (where Shakespeare happened to live and wrote the "Merry Wives of Windsor") and had a nice little dinner before we had to meet back up with the tour bus and make our way back to Suffolk. 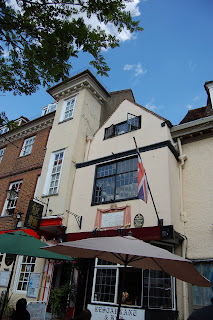 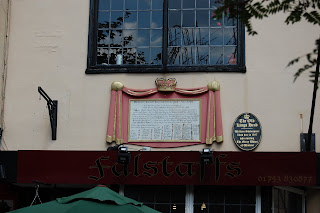 The actual story happens while we are eating. There were two obvious American tourists (they were from Connecticut) sitting at the next table to ours hemming and hawing over what to eat. One asked what a "jacket potato" was and the other who was as uninclined as the other guessed. It was sad, really. So me, being me, turned around and said " A jacket potato is a baked potato, and I recommend the bacon and cheese, it is probably the best choice, " or something along those lines and insert some friendly American banter (which is how I found out they were from Connecticut). They thanked me and continued to hem and haw. "Bacon, what exactly is bacon," *sigh* They then asked me something along the lines of " is it bacon or Canadian bacon" *sigh* "Well it is bacon, but it is British bacon, which has considerably less fat than American bacon, so I guess it would be closer to a thinner Canadian bacon," I offered for their consideration.
Now, what I wanted to say is "It is British Bacon, which has less fat than American bacon, but if you want American bacon you should ask for "streaky bacon" but then you will have everyone in here looking at you like you are a loon because streaky bacon to the Brits is not the creme de la creme. Oh and they probably don't have it anyway at this little cafe. By the way, ham is called gammon," but I didn't and that was an exercise in restraint. I am such a saint.
Posted by Kat at 12:00 AM

You are, indeed, a saint.

PS - know the cafe. You did well. Way better than a McDs!

I love British bacon, but I'm not so keen on the sausages. I also love the gammon. What I find silly is that some Americans can get so stumped by the easiest of Brit speak.

My husband and I went to Windsor and I loved it . . . the whole darn place!

I want some British bacon!

I flew over Windsor Castle on my way to Germany to visit my sister (changed planes in London.. flew British Airways) Does that count?

As far as I know, I like bacon no matter what country I'm in!

Have only been to Windsor Castle once and it was in the early 80s; they definitely did not have a Mickey D!

I love American thinking sometimes...
especially that the English language is ours and the Brits say "funny things".

thats too funny. your restraint is impressive.

I finally found out what bangors and mash are, although I can't eat bangors. Bugger.

I am always amazed that people who are traveling insist on eating as if they are at home. Live, experiment, you might actually ENJOY something new!
My husband occasionally asks me to make him beans for breakfast - just like we had in London... YUM. and the rashers! oh my...

ps. you ARE a saint.

I agree with the above comment. Isn't that the whole point of traveling? When in Rome...(or Windsor).
And you did show Great Restraint!

Hee hee, I like "helping" people like that too. Although I did once tell someone something wrong as they were rude!

I just learned a shit load about bacon. Thanks.

As a Canadian, I'm very interested in what this mysterious Canadian bacon is.

OMG, that's just like my parents. My Dad still talks about the Scottish cafe we were in twenty years ago and the Scot who had the nerve to sit at the same table as us. Shock, horror! I swear if my husband acts like that when we go next year I'll slap him.

In the same way you guys are all "British! Bacon! Castle! Squee!!", I am desperate to get over to visit the States. Where bacon could possibly be something else.

And restraint? That's an understatement! ...I think we need to be visiting each other very soon. :o)

Bacon is truly delicious but when travelling I do find that it is a completely different animal (not literally, of course) in different countries. Mainland European bacon is more like Canadian bacon - thin and kind of greasy. I've never tried American bacon, though. Sounds... interesting.

Hey Sprites Keeper - have you tried vegetarian bangers? They're not bad...

I laughed because I had the same thing recently. My friend introduced me to his American girlfriend and we talked. I think that's all the explanation needed but in case it isn't - we couldn't talk because we were laughing so hard at each other's accents, pronounciations and 'mis-used words' lol

I started to weep when you wrote they didn't exactly know what bacon was.

haha Well you know us tourists :)

No bacon here in Italy. Something called 'speck', though, for the German tourists. Don't like the sound of speck I have to say! I'm with Chairman Bill though in that I never heard of Will S living in Windsor...

I have something for you on my blog.

Well done you! I love British bacon! And, jacket potatoes but I honestly don't usually mix the two.

great story! You showed great
restraint and kept your sense of
humor. Some day I'll make it to
England, my mother came from the
Lake District.
One thing about MacDonalds u can
find them anywhere. Went to one
in Shanghai!

You are down with the local culture, lady! :)

Not sure how all bacons differ but the only bacon i love is the stuff i get in Canada :)

Windsor is so beautiful place, my younger brother is living in Windsor.
Thanks