I can kill you with my eyes. 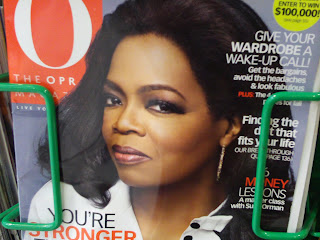 Oprah scares the hell out of me.

So, hey. It's me, Captain Dumbass. Kat is layin' low and asked me to guest for her. I haven't done a Random Tuesday on my own page for a month now so I figured why stop now. Hopefully people will actually come and read though since for some reason when you say "I'm guest posting" on your own page that somehow translates to "leper" and people don't want to follow the link to where ever you are. What's the deal with that? It's one click? Why am I asking you? If you're here then you did. Or, you're one of Kat's regulars and you're really wishing Kat was here. Well TOO BAD! I got the keys to the bungalow! 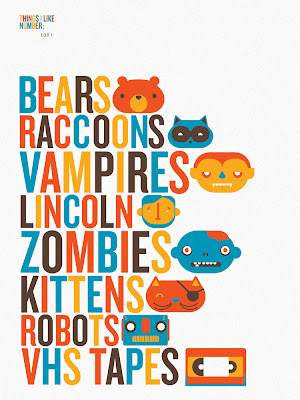 I'm sure Lincoln would be proud being lumped in with vampires and zombies.

I rented Wii Resort Sports for my boys last week. There's this great sword fighting game in it that you unlock after you've won a few other games. Basically you walk down a path and are attacked by groups of other sword carrying resort members. Let me tell you right now, I AM A FREAKING NINJA!

Oh my God, boys! A Ferrari? It's not even my birthday! You can stay up as late as you want and eat candy for dinner everyday! 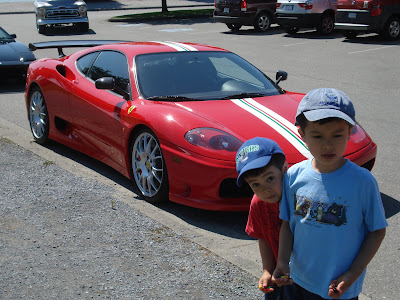 And then I woke up. And had a cigarette. (except not really since I don't smoke)

A couple of weeks ago my boys tried Guitar Hero for the first time. Now my oldest keeps asking if we can play Hungry Like The Wolf by Hannah Montana. I've given up trying to explain this. We don't actually have Guitar Hero so he wants to play by using two previously confiscated hockey sticks. Two minutes after giving them back because I thought it would be cute, him and his brother were trying to kill one another. Lord of the Flies. You don't have to send them to an island.

This is from a local Vancouver news station. If you like dogs and other peoples discomfort you'll enjoy this.

Ramen Girl - enjoyable, though Brittany Murphy looks a little like a recovering heroin addict through most of the movie. But maybe that's just me.

Return to Witch Mountain - I loved this movie when I was a kid and I enjoyed the remake. I'm sure if my kids had an attention span longer than a minute they would have enjoyed it too. How did The Rock go from being big wrestler guy to cute and squishy Disney character though? Aside from the boatload of cash?

Ok, it's over. Please make your way to the rear exit doors and ensure you've removed any valuables. We are not responsible for any lost or stolen items. Any complaints can be made directly to the Un-Mom.

First! Awesome picture of Liam peeking out from behind Connor. Did I tell you I picked up Pride & Prejudice & Zombies? I did. Working my way through Rage Against the Meshugenah first.

Those ladies have obviously never watched "The Dog Whisperer".

I loved Escape to Witch Mountain!!!

I am off to your friends sight...I need a laugh, more than you will ever know.

p.s. CONGRATS on the new car. Such thoughtful young men you have.

OH MY GOODNESS!!! That was hilarious! LOVED that video!! :)

Did you see the guy peek out from behind the curtain when those women were wrestling with the dogs? Classic!

You're a ninja and you let your kids play with big sticks. I'm getting a picture...

Lord of Flies? I won't have to read it now thanks to your kind visual.

When's Kat back? I'm wondering if Oprah scares her as well.

I loved this Random Tueaday post! On a Monday. But it made it FEEL like Tuesday and that's what counts.

@ Kat
Love you, but commenting to the Captain.

@
Captain Dumbass
I’ve only done one guest post and it didn’t get the best reception. What.Ev.

To be honest I read you both, so I found this checking her post first…not picking favorites, just going alphabetically…that and she’s prettier.

Per your quote, “I AM A FREAKING NINJA!” So say you. Let’s see photographic proof…of you, not your boys! I await the day they both read and start their own blog. Just sayin’.

And hockey sticks are sooo guitars, as are tennis rackets and…air.

Go see GI Joe. Lots of stuff gets blown up and there's a chick in a tight black outfit. You'll love it.

Those ladies and dogs cracked me up! I had to stop watching halfway through though. Did I miss anything good?

OMG thanks for leading me to Malady - she is great!!!

I heard that Ginger (the lovable pitbull) has tons of adoption applications.

OMG Hannah Montana did Hungry Like a Wolf - head on desk crying now.

Captain! I would read your ramblings anywhere. Of course I miss Kat, but you are more than acceptable as a guest poster.
The pic of your boys is HILARIOUS. And Miley Cyrus sings Hungry Like a Wolf? The four horsemen should be along any day now. Can I get a ride in your fancy new car before the apocalypse?

OMG Captain, that was the most awkward funny video ever! I love it when that lady asks "why they even do this?" Thank for guesting for me!

shew its is early tuesday morning! and your tale of the "guitars" and killing each other~ well that was how our boys(17 months apart) were. They were in constant battle with anything they could find.
great post! and ps OPRAH SCARES ME TOO! LOL

Boys + sticks = beating each other up. Or at least it did at my house.

Oprah scare's you? Now you're catchin' on.

Bear, Raccoons, Zombies, Lincoln, VCR Tapes? What the hell is that thing? Did Nick TV come up with that?

Miss Malady is now on my reader list. LOVE.

I'm trying to find someone to go with me to see "District 9". I might have to go alone.

I actually clicked this time CD - I actually did it. Don't think I will ever do it again, you know how I feel about extra steps and stuff.

However, Hannah Montana has gone too far. NOBODY messes with Duran Duran. I still think that Jon is going to come and sweep me off my feet. Okay, maybe I'll have to just follow him - i'm not so petite anymore.

Good post. I may have to watch witch mtn. I did love the old one, but was afraid of the new one. Naturally, should I hate it, I will blame all of Canada.

You are so worth any amount of clicking!

That video clip is hilarious. Since when does hannah Montana get credit for Hungry like the Wolf??

Oprah scares me too! LOL :D

The Rock is a cute wrestler dude.. LOL :D

"I'm sure Lincoln would be proud being lumped in with vampires and zombies."

To say nothing of VHS tapes.

Wow, that was all over the place. It was so...random!
I loved that poster!!!! Did you make that? Oh and thanks for the plug!

Now that is a Random Tuesday. I really enjoyed it. Needed that this morning!
Followed Captain Dumbass over here. He told me to...told me to click on the link.

LMAO at the video! Love your new car! Maybe you can get the new Jonas Bros CD and play "Route 66" while cruising around in it. Great RTT!

Opes scares me too. She is like a clown, without the red nose.

I don't get why people won't follow the guest post link either but it's kind of annoying that they won't since it's just one damn click.

My mom has that whole "I can kill you with her eyes" look, she shoots actual daggers out of them. I think she trained Oprah.

I have to get that Wii game sounds cool. Jerry sent me the link to the news show that was freaking hilarious. You don't have to bother checking out my blog, I felt the dinks didn't get enough attention so I linked it to my RTT......unless you want to look at them again. tee hee hee

I giggled so much at the video that I snorted! My office mate asked if I was ok cause she didn't know if I was laughing or crying...I was doing both!

sword carrying resort members sounds ominous. My teenage daughters are guitar hero fanatics... watch out for that one - except it has helped give them good music taste (meaning MY taste)- they scoff at pop and JoBros. I like the idea of smoking a cigarette- in theory only... great randomness. Oh, I'm with you on Oprah :)

If only the racoon were driving the Ferrari.

Oprah scares me too and what scares me most is I truly believe she could end up being our president one day. Of course she'd have to take a major paycut.

as for The Rock... he is actually supposed to be really great with kids (like he granted more Make Wish wishes than any other celebrity kind of thing) so maybe that's the reason for all the fluffy kid films. That and kids just seem to be drawn to the guy. well, that's my take on it anyway. Glad to hear the movie was good, gonna add it to the netflix list!

Nobody is going to want those dogs. They are insane! That lady on the left was so ticked off and trying to hide it! LOL

And why is it that people won't click through to a guest link? It's still you just a different place.

I think this may be your best RTT ever. I'm not 100% certain, but pretty sure. I'll go watch the video now. You should video your kids trying to kill each other.

By the way, where the hell did you get that poster of "things you like?"

Oprah scares me too!! She jumped the shark for me when she compared her dogs to children. I love dogs... but do not call them children.

i have a vision of my children beating eachother with hockey sticks....

I don't think we can be friends anymore.

You're NO leper, so I've cometh forth to readeth your posteth. Now I'm all damned tongue tied.

I sort of dig the rock as a Disney mainstay. Although, I like him in kick arse fighting bad arse movies too. *shrugs*

Confiscated hockey stick/guitar hero murder scenes are a bitch to clean up I hear!!!

what were u thinking giving the
kids hockey sticks for guitars?
Remember when you smashed your
poor little brothers knees with
a hockey stick? No, it wasn't
an accident, he was lying in bed at the time.
If the boys bought you a Ferrari,
I want a Porche 911 Carrera.
Don't bother seeing 17 again,
dumb!
as for the video, it even made CNN today, Ginger, by the way is still looking for a home!

I need to rent Escape to Witch Mountain!

Also, I love that poster. You need to get that thing up on cafepress, stat!

Have your boys been sandbagging you? Did they win the Lotto and not tell you. You do know I have been a big supporter of yours, right.

great job Cap! I didn't know you liked Lincoln. YOu're not even American.