This weekend the bungalow crew and I headed down to the British Museum.  It is actually quite embarrassing that we have lived here for four years and this is the first time that we have made our way down there.  We did however, finally make it down to see the treasures stored there.  And it was amazing.  Absolutely amazing.  I know we didn't even cover a third of all the collections and I am already dying to go back and see the bits we missed.

But that isn't the story I am writing about, just the setting.

We were walking around the classical Greece section of the museum, admiring the beautiful statues and friezes, as you do, and my kids didn't even bat an eyelash at all the statues being naked.  I bet you're all thinking "how cultural!" well, yeah I guess.  I mean, it is certainly a bit highbrow for my children and I was really proud of how mature they were acting.

Caroline in particular was really taking it all in.  Then she turned to me and said very seriously and said "Mummy, he doesn't have a penis!"

Then out of my mouth popped "Well, he is very old."

Imagine this conversation between adults....

And off they go skipping and working together completely uncaring of each others differences.

Cause that is what I saw the other day between my daughter and a little girl on the playground the other day.  I just wish adults could be so cool.
Posted by Kat at 5:51 AM

It Was An Accident I Swear!

The first thing you all need to know is that I have a major fear of authority.  I am seriously scared of pissing off "The Man"(not as in my husband.  I am perfectly good at doing that on a regular basis) or any sort of person with even the slightest bit of authority over my life.  So when it came time to renew my visa to stay in the UK, I made sure that I started it early so that I wouldn't accidentally overstay.

So my husband got the forms from the passport/visa office on base and sent them to me and I filled them out and went into the office and they told me that the forms were out of date and that the UK Home Office had changed the forms.  So I filled out the new 23 pages of forms.  While I was filling out the new forms I took a look at the old visa inside my passport only to have one of those moments where my stomach literally shot into my throat and I thought I was going to heave up my dinner onto my ugly kitchen carpet.

My visa had expired.  In NOVEMBER.  I am here illegally.

So at this point I did what any sane person would do.  I started panicking.  First I told my husband, who wasn't amused.  He gave me the stern "how the hell did this happen?" face.  Then I called my best friend who tried to reassure me that everything would be fine surely.  Then I called Liz who told me that "We never throw anyone out".  Skyped with Nickie who kinda helped me not panic so much by making me laugh and distracting me by making rude cucumber jokes while she was cooking.  And then internally freaked out until this morning when the realization that I had to go into the passport office and admit that my paperwork and my children's paperwork was immensely screwed up.  The whole time thinking "They're gonna deport me!"

So I Facebook messaged Liz and jokingly asked if she knew anyone who sold Xanex on the down low.  To which she replied "We're British, we just drink gin." And I told her that I couldn't drink gin because I was going to have to drive to base and didn't need to get nicked for a drink driving offense on the way down to sort out my visa issues because I didn't want to end up as a story plastered across the front page of the Daily Mail.  Which she acknowledged was a fair point.  To be fair though, I bet I could have sold my story for a good bit of money and taken some properly trashy photographs of me with my boobs hanging out and a cigarette in my hand for the front page.

So I headed down to the passport office still feeling like I was going to be sick on my nice semi new black flats.  I filled out my information on the computer queuing system and when the lady called me to be seen I walked up and said "I have a big big big problem.  My visa has expired and I didn't realize it til I was filling out my visa extension paperwork because..." and then she interrupted me and said "because your orders said you were here for four years and your visa was only issued for three years.  Don't worry you won't be deported."  And that is when the whole situation became kinda funny for me and I didn't feel sick anymore.

Apparently the consulate in New York doesn't know how to read American military orders very well and this has happened a number of times.  Now I don't feel so special.

But since I am still scared of "The Man" I am going to distract them with cute pictures of our new kitten, Mr Tibbs, until I am legal in about 12 weeks give or take depending on the bureaucracy involved.  The paperwork is in the mail so to speak. 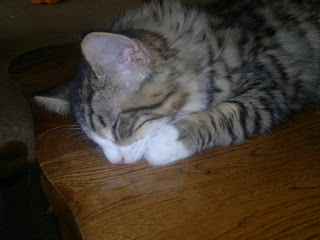