On Saturday nights my family usually has a family game night. Some of our favorite games are card games such as Rummy, Uno, and Go Fish. They are easy enough for KiKi, my five year old, to catch onto but challenging enough to keep my husband and I entertained as well. 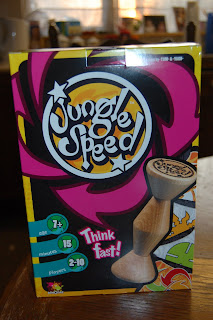 Recently I was sent the game Jungle Speed to review with my family. It is a card based game that requires a keen eye and quick hands. The premise of the game is to flip over your stack of cards and if your symbol or color matches (depending on what is wild at the time) another players card, you have a duel and try to grab the totem that is sitting in the middle of the table before the player with the matching card. 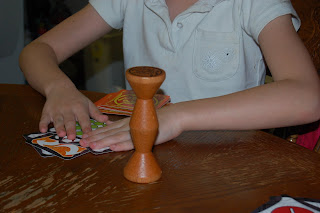 The Totem that you need to be quick enough to grab during duels! 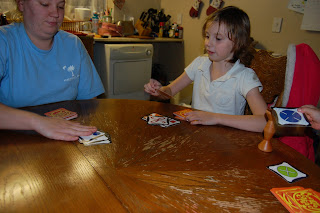 My oldest daughter, LaLa fell in love with this game the first time we played it and demands to play at least one hand during family game nights now. KiKi at first had a bit of difficulty playing the game because the rules are a bit more complex than other games we had played in the past. However with a few hands she caught on fairly well but I still had to keep a close eye on her to make sure she was grasping the rules. 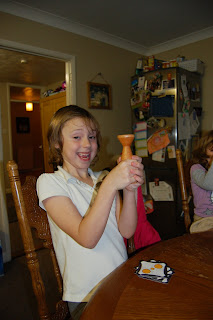 LaLa grabbed the totem!!
This game is available in both the UK and the US.
Enjoy the cheese-tastic advert below.
Overall we found this game to be quite fun and will be added into our rotation of games to be played during our family game nights. I am sure with a few more family game nights that KiKi will be less frustrated with the rules and love the game just as much as LaLa does.
Posted by Kat at 12:50 AM