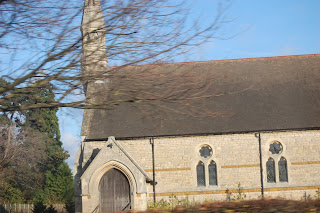 Oh man... how do I squeeze a weeks worth of activity into one post? Well I guess I am just going to have to go in broad terms and then talk about specific events later on in the week. I got to England last Saturday at around ten in the morning. I then forced myself and the family to stay awake until around 10pm. So I had roughly NO sleep in 40 hours. I would have slept on the plane except for the fact that my seat reclined roughly a quarter of an inch and everytime I closed my eyes the air waitresses would start another beverage service. I mean really, how many apple cranberry juices can one person drink during an 8 hour flight? The kids slept pretty well during the flight with KiKi leaning her head on my arm and stretching one way across the seats and LaLa laying against her dad and stretching across the seats in the opposite direction. Heathrow Airport? Oy! That place is a mess. Apparently, in the UK, trash bins are totally optional outside. I have never seen so much litter on the side of the road. My friend, D*, tells me that they have some sort of clean up crew that comes by every so often to pick up the sides of the road, but when people finish a drink or something, they just throw it out of their car windows. This is completely foreign to me because in the States, this would be a huge fine if you got caught by a police officer.

For the record I did not help myself in my no sleep department by consuming a couple of pints of cider that night around a bonfire in my my friend's backyard. Cider is however some yummy stuff. I like the brand Strongbow the best (I had 3 different types to sample from that night thanks to my new English friend, N**.)

By this point I was sick of hotels so we decided to stay the night at my friends house. The next morning we started getting settled into our new hotel room. This room isn't nearly as bad as the room we had at the last base. This hotel room has 2 bedrooms, one with a queen sized bed and the other has two twin beds in it. It also has a fairly large kitchen and living area. It also has a washer and dryer (English sized...that is another post there!) and a dishwasher. The only problem we have had here so far is that the water temp was lukewarm for about 3 days until we got the maintenance men up here to fix it. Now we are getting to shower with hot water again. 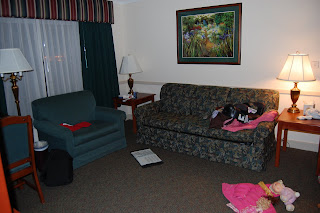 New room
Thankfully we won't have to stay here for very long because we have already found a house that we want to rent. We are just waiting for the OK from the landlord to have pets. It is a cute little detached house (to Americans that is a single family house), with 4 bedrooms, 1 1/2 bathrooms, and a detached garage that had been turned into a play room by the previous family. The Man is going to use the garage for his "Man Cave", in other words a place for him to go play guitar and be a man. Why do I all of a sudden hear that Home Improvement guy Tim Allen?

My new love is also Cadbury Dairy Milk chocolate bars. Someone will have to try to pry on of these suckers out of my cold dead PMSing hands. Hershey ain't got nothing on Cadbury chocolate. Whitmans, kiss my hiney. Mars...pfft. Cadbury is where it is at. Maybe I should have a contest for a chocolate bar...I need to think about this one.

This week was also marked by the 24 hour stomach virus from hell. First KiKi got a little diarhea and the next thing we know, The Man is laid up in bed for the next day and a half going at both ends, KiKi starts puking her guts up and then D's family all get it. Thankfully Me, LaLa and D were all spared from the virus. D felt a little queasy on Friday, but never actually got sick and I felt a little queasy this morning. When The Man and KiKi were sick I was feverishly Lysoling the bathroom and kitchen repeating the mantra "I will not get sick, I will not get sick, I will not get sick" I think it worked. Mind over matter, right people? 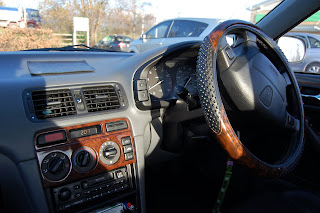 Umm..WTF the steering wheel is on the wrong side.
Anyhoo other than the stomach virus, I think we had a pretty good first week. We found a house, we met some really nice people, went to a birthday party***, got a lot of our inprocessing done, learned to drive a car on a different side of the road****, and got lost in the middle of the countryside with D while we went to pick Elizabeth up from quarantine. Did I mention that we also got a dusting of snow this morning?

*Need to think of a nickname for best friend D
** Don't know enough about new English friend,N, to make a nickname for him yet.
*** For another post
**** see above.
Posted by Kat at 12:48 AM

Oh i am so first in an international way!!!

Yay! You made it!

I can't move there ever bc that whole driving on the wrong side of the road thing and the steering wheel on the other side of the car dealy just freaks me out. Can you please straighten them out while your there?

I am so happy that you are there safe and sound. But what craziness you have going on.

that looks like it would be fun... minus the virus, of course.

Erhem (cough) just letting you know that you now have an English stalker who will have to keep an eye on you seeing as 'you lot' come over here trying to change us from our 'quaint' ways. (Madonna tried but failed miserably!)

I totaly agree with the litter problem - yes people blatantly fling their rubbish from car windows and drop it on the street. We do have campaigns to 'keep Britain tidy' but it seems people don't care. I'm one of those who make a point of telling people to pick things up, but also wary of who I say it to.

Cadbury's is definitely better than Hersheys - which I have to say is dreadful. We come to the US every year and have tried many of your 'favourites' - Rootbeer is disgusting btw!

Feel free to ask away if there is anything I can help you with. Steer clear of phone boxes - use your 'mobile' phone (not cell phone) and get used to using electric kettles!

We have Cadbury's here in Canada as well and um, yeah, way better than Hershey's. Maybe that explains why Americans call it a candy bar and we call it a chocolate bar (emphasis on chocolate).

Awesome...sounds like you are all adjusting nicely. Hey, do you plan on picking up the accent? Gotta love the british accent.

Welcome to the UK !

The main reason that there are no litter bins outside the airport ( or elsewhere) is that terrorists put bombs in them. There are a number of such people ( IRA members) living in the USA whch the US courts will not extradite to the Uk for trial becuase they are said to have been politically motivated and therefore not terrorists. Talk to your congressman about it.
All the same welcome and enjoy yourself

Glad you all made it safe and sound! Seems like you're adjusting rapidly to the mother country! I'm looking forward to reading about your adventures!

You don't have Cadbury in the US? Huh. Watch the beer there, it's a little stronger than what you're used to at home.

Whoo hoo!!! Sorry about the illness and lack of sleep, but still exciting!!!!!

Sounds exhausting, but it must be a relief to be there and have your house lined up. Congrats on that!

To find some more modern bedroom, platform beds and overall bedroom furniture u can visit spacify.com.

So glad to hear you got there ok but hate to hear about the sickos.

Strongbow is the BEST!

Glad you made it there, safely!

I am more of a Nestle's girl myself. But in all honesty, I will take chocolate in just about any form I can get it :).

I'm so glad you're there and safe and doing fairly well and SO excited to here about your new Britishy adventures.