My buddy Mary Anne or better known as The Stiletto Mom is one hot mama (with a kick ass shoe collection). Not only that, but she is an awesome blogger to boot. If you are still living in the Dark Ages and haven't checked out her blog The Stiletto Mom, you won't be disappointed. She is full of wit, charm and most of all a good sense of humor. Oh did I mention that I lust after her shoe collection?

I have to start this by saying, I envy Kat...I really do. Living in England sounds like absolute heaven to me.

My husband has been there more times than he can count. Being in the Air Force and stationed in Germany for four years (while running a women's dorm...) had it's fair share of perks for a young, single, guy. I've heard so many stories about his travels through London (and his travels through the women's dorm but this is probably not the forum for that) and more than anything I had always wanted to go and see all the sights he had told me about.

Finally, two years ago, I had the chance.

We were invited to the wedding of a friend of ours. Being the Royal whore I am (and not whore in a royal way, more of a rabid fan of all things royalty...just to be clear) we stayed in a super nice hotel across the street from Buckingham Palace. Big brass doors, shiny hardwoods, well dressed doormen...it was HEAVEN. Also? It was off season so half price. SWEET!

I headed over to London several days before my husband with my best friend Korey. I felt like I needed a full week to see the sights and for three days I traipsed around London checking out Trafalgar Square, The Tate Museum, St Paul's Cathedral...you name it and I was going to see it.

John finally joined my friend and me on Thursday just in time for the wedding festivities to kick into high gear. He flew overnight to get there and while it would have made sense to let him rest, I greeted him like an excited puppy demanding he take me immediately to The Tower of London. If you've never been there, trust me, this is no small tour. Tons of buildings to go through, grounds to walk, history to soak in. 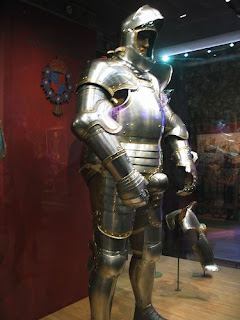 After hours of touring the Tower, making faces at the guards, hugging a few Beefeaters and causing general mayhem among the torture devices we headed back to the hotel to get ready for the night.

That evening we were joining the bride and a bunch of her friends for dinner at a swanky little brasserie then heading off for a night of dancing at the legendary Annabelle's. We ate, we drank, we talked, we drank, we danced and then we drank some more. Finally, somewhere after 2:00 am we decided to call it a night and head back to the hotel.

This is the part of the story that makes me a really bad wife...
So remember how I told you I should have let him sleep? And how I dragged him all over London Tower and then dragged him to dinner? And then forced him to do the white mans overbite dance with me until the wee hours?

Yeah, that will take a toll on a man.

My friend and I breezed through the door as the bellman opened it for us and waited in the lobby as John paid the cab. After paying, he made his way into the hotel through the same door, held open by the same bellman, and I'm not sure what happened next but he fell. And by fell, I mean he never bent, never crumpled, NEVER REMOVED HIS HANDS FROM HIS JACKET, and all without a single sound...he went down as flat as a board, on his face. Almost as if in slow motion, in one swift silent move, my husband became FLAT JOHN...a virtual wool coat of a puddle on the floor, like this: 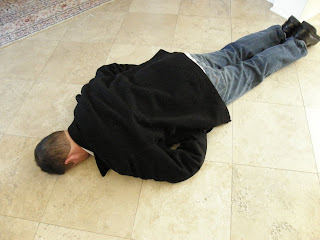 Photo re-enacted for dramatic purposes. No wool coats were harmed in the downfall of this man.

The thing is, after he fell...he didn't move for a minute or so and the entire lobby was sitting silently with their mouths hanging open, having a hard time believing they had just seen the prat fall of the century. All of the nice English people working there started to scurry around him trying to help him up all while having a nervous breakdown because my husband was lying ON HIS FACE on the floor and they honestly thought he might be dead he was so still. Being the wonderful wife I am, after a few seconds of stunned silence, what was I doing?

Laughing my ass off...that's what.

After the nice men boosted him upright and gave the very polite English side eye for being such a horrible wife, well, I continued to laugh until I cried...and snorted a few times sorta loudly. I was doubled over and at one point it became so bad that my friend and I were leaning on each other for support.

Amazingly enough, he got up unscathed, brushed himself off and walked it off. Give the guy some points, he knows how to take a fall.

Those "Mind The Gap" t-shirts they sell in England? Make a whole lot more sense to me now than they used to.

I would have laughed too, and I am from Blighty.

I remember being the only one laughing when a woman fainted and did the same in a fast-food place. I did some (not so) wise crack about the food not being fast enough. If looks could kill, I would be dead, and having fries with it.

OMG, that is HILARIOUS!!! You actually made me LOL with that photo.

Your husband is such a good sport!

OMG, I would have been laughing like crazy also. John must have freaked the Brits out. LOL

No woman in her right mind would have failed to laugh her ass off. You do your species proud.

@ Single Parent: Oh, I'm so glad I'm not alone. Srsly, you English peeps can shoot some dirty looks!
@Petra: That was the fifth shot we took, he was so annoyed at me...and...I think his nose hurt from laying on it while I took pics.
@Michele: Um yeah, they were two seconds away from calling an ambulance!
@The Mother: Thanks, am proud to be a huge bitch!

I think I might have fallen over from giggling as well! So was it as hard a surface he landed on there as he dramatized for the photo? tee hee hee

That seriously made my day. Hilarious. How could you not have laughed?

@dorsey, oh yes, every bit as hard...and much dirtier.
@ngs...impossible...couldn't have stopped myself if i tried.
@bex...i smell a career as a tv producer in the works!

Hubby is pretty cool for reenacting for the photo. I would have laughed my ass off too, even knowing that I'd be killed in my sleep. Sometimes it's just worth it.

Ugh... I have a belly ache and you just made it worse! I haven't laughed that hard in forever. And thank you for the photo. I will never look at him the same way again.

The best part about this whole story is that your husband was willing to lay down on the floor so you could take his picture. He's a good sport.

Wait - is it lay down, or lie down? I can't ever keep that straight.

I'm laughing at just the reenactment of it, so I'd have been gobsmacked (is that how they say it in the motherland?!) had I witnessed the actual event!

Girl, I get one Chardonnay in me and everything in life is funnier. You had a whole evening of drinking. That would make flat John FREAKIN' HILARIOUS!

Why is it we laugh at someone we know when something like that happens??!! I know I would have laughed till I "snorted." It is real hard to ask "are you okay," and sound sincere when you are laughing at them. HAHAHA

Falling down is hands down the funniest thing EVER! The only way it could have been more funny would be if a little kid hit him in the crotch with a bat first.

Did he fall asleep? I think I would have!

HA! Too funny! My husband did that once when we were leaving a concert. He hit the ground just like that, I laughed my ass off, and the crowd tried to help the giant get up.

He wouldn't move, so I told him he was in the road and a car was coming. Yeah, that got him up, and I laughed my ass off some more. The crowd hated me!

Love this. The photo is the cherry on top, especially with that caption.