Let's File This One Under: It Could Only Happen to Me

I had just finished cleaning the bathrooms at the Bungalow, so I opened a window in the front bathroom to air it out.  I then left the job, well done I might add, and went to check my emails and do some twittering in the kitchen.  A well deserved break after spending an hour scrubbing toilets, tubs and sinks.  I had been seated maybe 5 minutes when I heard someone in the front bathroom.  I yelled at KiKi to get out of the bathroom (she likes to play in the sink) and she responded from the living room "Not in the bathroom!"  Oh, just the cat then.  No big deal.
CRASH!!!
"What the hell???"  I ran into the bathroom to see this. 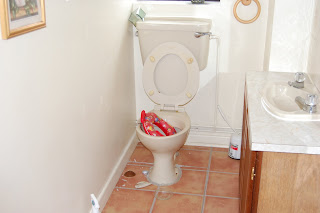 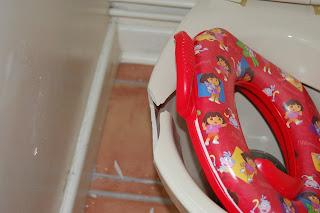 My cat broke my toilet.
Remember that open window.  Apparently it looks like a really nifty escape hatch to a cat who thinks he is a POW.  Unfortunately his path was impeded by  a large barrel jar candle and candle stand from PartyLite.  Actually here is a picture of exactly what was in his way. 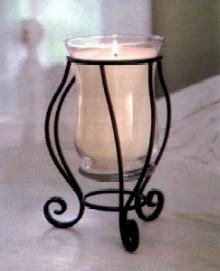 When he tried to jump out of the window, and failed, he landed on the candle apparently and knocked it off the windowsill where it was sitting.  The candle itself came out of the holder and the glass of the jar candle hit the edge of the potty and shattered it.  Now how exactly do you explain that to the landlord?
Well this is how you explain it to the landlord.
Me-  Hi.  This is Kat from 3 Bedroom Bungalow.  Well, I have a problem.  I am going to need a repair man to come out and replace a toilet because, well, my cat broke the toilet.
Landlady- *starts laughing hysterically*
Me-  I know, I feel really stupid calling you, but he shattered the toilet bowl by knocking a candle that was sitting behind the toilet down off the windowsill.
Landlady-  I can do you one better.  I broke a toilet by having a candle collapse a shelf I installed in my washroom above the toilet.  I'll have the plumber out tomorrow to give you a quote on a new toilet.
Me- Thank you.
I still feel like an idiot.
Update: The repair man came by to survey the damage and said he "needs to make some inquiries" because "the toilet may be obsolete".  Crap!
Posted by Kat at 12:00 AM

Crap indeed!! But you know, more importantly, is the cat ok?

IT's just your day for repair jobs now isn't it? Amazing such a small creature can impart such damage. I sympathize with your HP call. We spent over a year in back and forth phonecalls with our internet service provider because their service was not working with our BRAND NEW computer. Being a retired computer tech, I told them I was most definitely sure it was their modem. They denied and denied finding every excuse to blame it on our equipment, phone line etc, until finally they sent a service person out to check the phone line. Guess what? Phone line good, modem bad. I wanted to punch the repair guy in the face.

Are you making your cat pay for the new toilet?

And in your update, that is a quality use of the word 'crap'.

Oh man, this definitely sounds like something my cats would do! I would've had trouble refraining from tossing the cat out the window (maybe not literally...but I'd threaten it lots).

Is it possible the cat was simply trying to light the candle?

I hope you have more than one bathroom Kat...as waiting for a few days could be tricky.

Maybe you should start wrapping your home decor with styrofoam? Or bubblewrap?
Just so you know, it was the same candle that fell on my foot a few years ago and I had to get 3 stitches. It's cursed!

Recently here in Utah we had a guy destroy a toilet because his gun went off... I had no idea a candle could do as much damage.

I think statistically speaking this could happen to more than just you. Or did you mean fate? Like destiny wanted to break your toilet? Because destiny can be a real jerkface.

What is that red Dora thing in the toilet?

Obsolete toilet? How does that work? Is it shitable? than its not obsolete!

You may feel like an idiot, but at least you'll be an idiot with a new toilet.

I am glad to know I am not the only one who has the devil for a cat!

Home Depot has a whole crap load that you can even sit on and see if it is comfy.

Anyway, this was too funny - I'm an idiot all the time. Stop by anytime for my stories of being one.

Your cat is the awesome.

Crap! LOL! I will definitely be watching my cat alot more closely now! Hope they fix it fast!

It's quaint that you think the cat did it by accident, but in reality the cat was intending the candle to fall on your head and kill you. Never trust a cat.

Sorry this happened but man it made for great blog fodder.

Damn those silly cats! That actually sounds like something my HUMAN son would do...such is my life.

Man, you know you are in trouble when your toilet is obsolete! LOL

Of course the toilet is obsolete. You didn't really expect otherwise, did you?

I have one better...I broke a toilet by ACCIDENTALLY pushing Master Wog out of the shower (yes, we were showering together). He instinctively grabbed whatever was closest, that being the shower curtain, which in turn pulled the rod off the wall and BAM! smashed into the toilet. To this day, I say "showering" and my family says, "yeah, uh huh, sure".

And look at the bright side, atleast you don't have to worry about the cat trying to get in that window again!!

ok. They don't make toilets like they used to.

And yes, we didn't know that there were differences in toilets either, which is why we bought "the wrong toilet" for our remodel!

But seriously, I had no idea candles could do such damage! Noted.

Unbelievable! Sorry that happened to your poor toilet and your poor bank account.... ugh!

Oh no, honey, I have had some nightmare toilet episodes myself. None involving cats though.
Maybe "obselete" means you'll be getting a better, newer, more modern one?

Cats. They just know how to be the centre of attention.

Can you dock the cat's allowance for a few months to help pay for this now "obsolete" toilet? How inconsiderate of him!

Flipping heck, that candle holder must have been pretty substantial to chip a toilet like that.

Did the cat give you the 'wasn't me it was already like that ' look?

Maybe kitty can repay you by LEARNING how to use the toilet.

Oh LMAO!! And what a fab landlady but I hope to god your toilet isn't obsolete for long with your young family!

How does a toilet become obsolete? Do the new ones communicate with satellites or something?

Your cat must be freaked out!

Cats are evil! That's why I love them so.

OMG.. I totally just had to read this aloud to my hubby. What a totally random toilet breaking accident, LOL! I'm glad you have a nice landlady:)