Have you guys met Jess? You know my crazy ass friend down in Savannah; the one I have been promising to visit for almost a year now? I finally got down there to visit. Ya see, Savannah is literally less than a two hour drive from Charleston, so when I got the invitation, I was all over it like a fat kid on cake. I just had to sort childcare and transportation. You know since I didn't want to pull a "Sweet Home Alabama" and have someone say "You have a baby....in a bar...."

Anyhoo, I drove down there Thursday afternoon and met Jess at her work (after my GPS lost the satellites and I had to call Jess saying "I am lost! Where there hell am I. Lucky for me I was only a couple of blocks down past her work) and gave her a ride home. There I met Bobby, my older gay musical twin brother, and Krystal, who is entirely too sweet for words. Eventually Larkin and Master Wog showed up and we headed out to River Street in Savannah. Well, actually we headed to The Bar Bar. Got some deeply discounted drinks from Jess' buddy Christine, who is a bartender there. Definitely off to a good start there.

Next we had a walk down to River Street, where I composed this little letter in my head: "Dear Homeless People of Savannah, No I do not have any spare money. You see I have this thing called a bank account, which gives me this thing called a debit card which allows me to buy this thing in my hand called beer. Now, If I gave you money it would give me less money for this thing in my hand called beer. Go get a job, and quit begging the tourists (and locals) for money. Seriously! Kat.

On river street we also went to this place called the echo circle, where you stand in the middle of this circle of pavement, that is surrounded by a brick boarder and trees and OMGoodness your voice echos back to you and it is really trippy. After that we headed off to our actually destination Bay Street Blues so we could get down to the business at hand (writing peoples names on the wall). 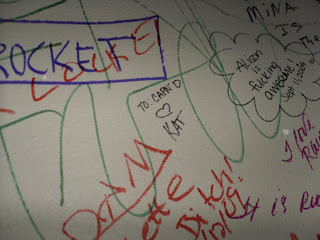 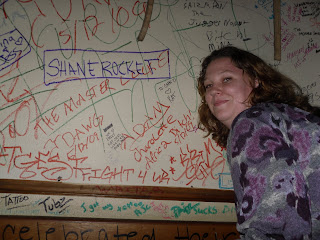 After Bay Street blues we met up with Mitzy (if you count now we have four bloggers together plus our entourage) then headed down to Blaine's. Awesome awesome awesome gay bar in Savannah where Larkin, Jess and Bobz sang karaoke. Which I would have totally done but SOME PEOPLE didn't wait for me to see the book with them...nevermind the fact that I was probably at the bar getting another beer..(umm hello, $10 all you can drink beer!). They were fabulous anyway and made shout outs to me on stage, which means they are completely forgiven. 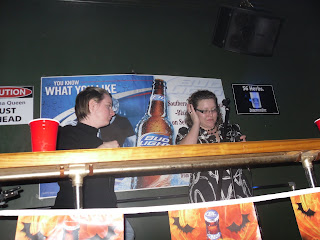 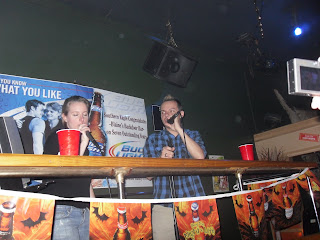 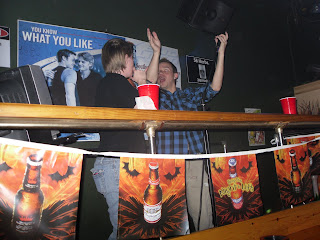 Don't cha wish you girlfriend was hot like me?
When I finally fell asleep on the magic couch, after the best biscuits and gravy EVER, I may or may have not been really drunk (thank you, $10 all you can drink beer at Blaine's) and I had definitely had one of the best nights in my life. I finally met in person some of my best buddies ever and had a complete blast. Now, if that isn't a ringing endorsement to go meet your "bloggy friends", I don't know what is. You will never know how much fun you could have until you try. 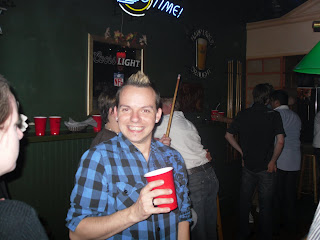 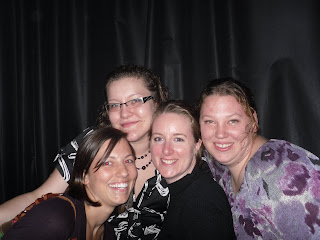 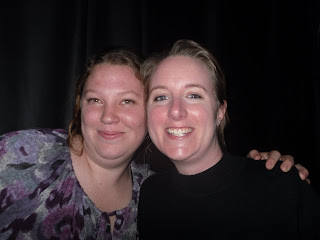 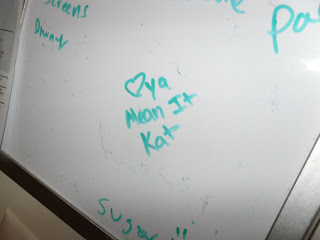 Labels: I want to put them in a suitcase and take them all home with me, Jess, Savannah, So much fun

Awwwwwwwwwwwwww my note on my eraser board!! Still up btw! We will now write around it!! Great post!! Miss ya much! Hope to see you in your hood one day! We gotta let Bobby hear his British music on scene!

Fun fun fun! I'm getting together plans to go meet Stacey The Random Cool Chick - unfortunately we are bringing kids. We'll have to go lite on the beer I guess.

Have fun on the rest of your trip!

Drunks in Savannah are going to get the wrong idea about me.

This fat kid, he was actually on a cake, or crazed by one, or both?

Half the world's graffiti can be traced or linked back to Captain Dumbass.

Looks like fun. I love that scene in Sweet Home Alabama, you need to add that line where she says she can bring the baby because it's still on the tit...

Sounds like you had an awesome time, though really, when you combine three things that start with B - blog buddies, biscuits and gravy and beer, where could you possibly go wrong?!

Hey, what is this 'shoop' of which you speak?

And I don't think the Captain has to worry about the drunks, EVERYONE already has the wrong idea about him! :)

Awww now I'm super jealous. There doesn't seem to be many bloggy people down here in NZ.

Looks like you had fun with them all....$10 for all you can drink beer? Hellz yeah!!

I want to write my name on the walls, but my wife (and my landlords) frown upon the idea.

Great post! Looks like an awesome vacation all around. Only been to Savannah once....cool place and once again I'll say Charleston is on my to-go-to list.