This post was written by my husband, The Man. If you were not aware my husband is a member of the United States Air Force. He has been in the Air Force for eight years and he has been to war in Afghanistan. He asked to write a post for the Bungalow so he could express his gratitude for those who served before him and remind other Americans about the purpose of our national holiday "Veteran's Day". In the UK and Canada it is known as "Remembrance Day". A day to remember the sacrifices that our service members and the civilians who supported them during times of war. Please take a moment to remember the service members who have tried their best to keep you safe, no matter what country you are from. 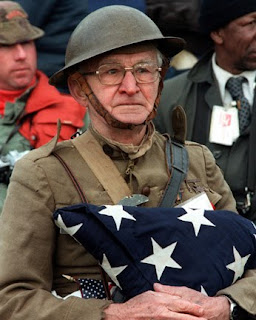 As many Americans take this Veteran’s Day off from work, I want to remind all Americans of the importance of this day. It may be a well deserved break from the daily requirements of your job, but it serves a much higher purpose. As Americans, we live and breathe the freedom that many take for granted. This liberty that we all value has come at a steep price for many families and generations of Americans. We have persevered as a nation on the backs of ordinary men and women that have made the ultimate sacrifice for our nation. From our nation’s “War of Independence” to the battles in Afghanistan and Iraq today, thousands of our military’s greatest have paid the ultimate sacrifice. Our nation’s “finest” have continually fought for America’s freedom through the generations. People who values consist of God, nation, family, integrity, and service before self. People who consistently bear the awesome task of defending America. People who put individual desires to the side for the good of all Americans. These are the people who should be remembered on this holiday. America is the greatest nation on earth because of these people who sacrifice to defend freedom and liberty. As you go about your day, please take a moment to reflect and remember the lives of “America’s Finest,” who gave it all to make our nation what is it today.

Thank you all for you unswerving service and selflessness on my behalf and my family's. I so appreciate it! I think of you and pray for you often.
Thank you for this beautiful tribute.
Hugs
SueAnn

Thanks for such a great post. The photo you posted is one of my favorite Vet photos. It's also one of the saddest IMO. Thanks for your service.

Beautiful. Send my regards to The Man (even though he thinks I don't exist!)

Thank you for your service..as a military wife whose hubby has 28 years of service under his belt and is on his 2nd unaccompanied tour for 2 years I know how hard it is!!

Please thank The Man for such a wonderful post today, as well as his service to our country. Thank you for supporting him too. As a military spouse myself, I know it's rarely easy to live at the whim of the military. If you don't mind, I'd like to share the link to this posting via FB.

Amen, amen and AMEN! I am SO VERY thankful for all the men and women who have served! And many thanks to The Man! (OH, and I miss ya'll like crazy mad!)

I love and respect "The Man" so much. I am proud to call him my grandson. I know what military life is like (being retired from it after 25 years) and it is not for wimps. Both of you are to be admired and supported with all our love and prayers. Believe me when I say you have mine every day.

Kiss the girls for me and when you talk with "The Man" tell him again that I love him and pray for him every day.

Thank you and your family! Very well written. We are proud of you and love you! ~Mike, Kristin, & Gavin

Thank you for a wonderful post! Thank you for your service to our great country.
Thank you, Kat and all military wives, who hold the fort when their husbands are away, defending our freedom.

There are many men (and one woman) in my family who have served or are serving in the military. I appreciate all you do!

Thank you for your service and for this wonderful reminder!