My cat, Sam, he look so innocent. Don't believe him. 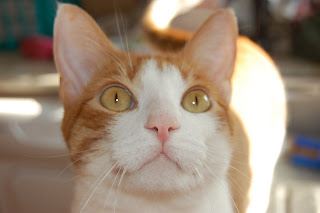 Last week we had a dead mouse in our yard. A week before that there was two bunnies and a bird of some sort. We have also had a pigeon meet his maker in our yard. This death was predated by several moles and a couple of mice.

I used to stand at my kitchen window, before Sam was released into the general population, and pretend that I was Snow White, looking at all the birds and bunnies out in my garden when I was doing the dishes. This doesn't happen anymore. My garden has become the killing fields for my cat. 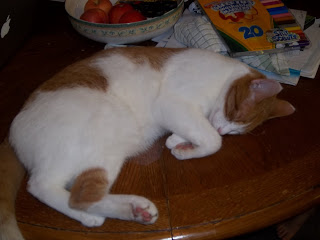 Haha love this, my cat is a house cat so he can't go out so my garden is full of little pretty birds. It drives him crazy cause he sits at the window and he can't get to them!

We had a kittah awhile ago that was such a killer that we put a white board up to keep track of her confirmed kills. Gruesome but entertaining.

Your kitty is definitely a slayer!! Beautiful and a killer! A lethal combination for sure!
Have a blessed Easter!!
Hugs
SueAnn

No, no, no...I can CLEARLY see from that face that he is innocent. I just know these things.

Uhm, just be happy that you're finding dead animals in the yard and not in your house...ewe!

That's why I do dogs. Mine just chases ants across the kitchen floor!

Not Sam Kitty. Not the sweet little creature that kissed me goodbye. I love him even if he has blood on his paws.

Sorry, still so cute! Our first cat was a killer. She brought a blackbird home once which hadn't quite expired and proceeded to poop on our living room curtains. Not the best day I'll admit... Happy Easter :D

I agree he does have a bit of a 'shifty' look about him, but then all cats do. Never trust a cat!

I'm a dog person, can you tell?

i need that cat.


Mine has NOT quite mastered the art of killing.