I have the Internet back!!!! Now it is time to catch up on what you guys have been doing in the past week*. I have been moving into my new house, paying my TV tax, getting my Sky (satellite) installed, waiting on my internet, trying to figure out the cheapest way to call the USA, and Christmas and house set up shopping like it is nobody's business. Oh and did I mention that there are only 10 more days til Christmas? Where did the time go? Didn't Thanksgiving just happen like a week ago?

I guess I should show you guys around the new bungalow. It is a vast improvement on the TLF that we were staying in. I still have hotel like furniture that we are borrowing from the Air Force until our furniture arrives, but it it at least is starting to feel like a real house (even though it is filthy right now because of moving in and such). The new place is a 4 bedroom bungalow (but we will pretend that it is only 3 because bedroom #4 is now going to be the office) and it has a detached finished garage that was used as a rec room by the owner (our landlords), we are going to use that as the "man room". In otherwords when "The Man" decides that it is time to play his guitar at rediculous decible levels, he can go to the "man room" to do so. Right now it is empty and I don't have a picture but once it has something in it and is fully manly I will show you guys! 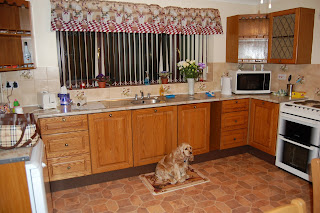 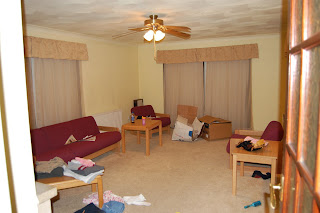 The Living Room (lounge). Notice the lovely Motel 6 quality furniture. Don't notice the pile of laundry, sippy cup, or 2 large boxes of moving trash that are in the background. 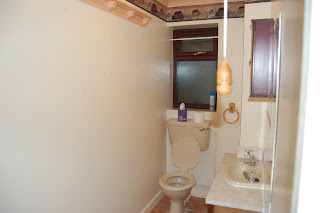 The poweder room. Nothing too spectacular here other than the fact that this toilet has an American flusher thingy! 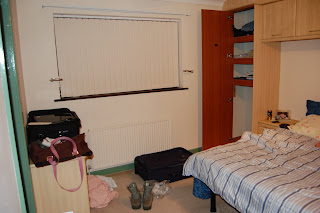 Part of my boudouir. See that suck-tas-tic blue stripy comforter...yeah it has been replaced with a 4 inch thick douvet. Did I tell you guys that it gets cold here at night? 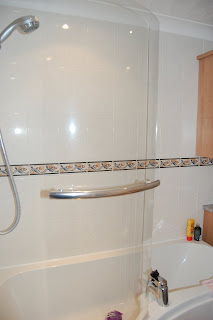 This is the shower in the girls bathroom and frankly the only shower in the house that has any water pressure. I hate showers with no water pressure. I think that is actually one of my biggest pet peeves. When I take a shower, I want the water to feel like it is going to knock me into the back of the shower. I have only actually found one shower that is absolutely perfect and it is the shower on the 2nd level of my mom's house. It feels like a pressure washer and it is fabulous! The other shower in the house is in the "en suite" bathroom (master bathroom) and it has just enough water coming out of the shower head to piss you off. 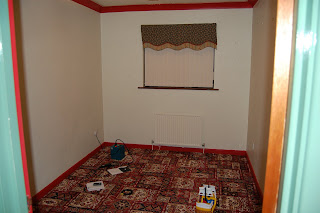 The now empty office. Notice the hideous carpet. This is why it is the office and not KiKi's bedroom. 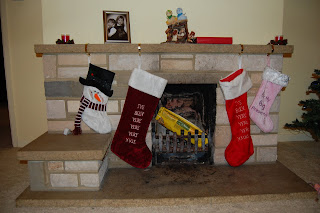 OK this is my favorite part of the house. My fireplace. Of course I think it needs to be swept by a chimey sweep before I even chance trying to light a fire in it. I could just see it now, me trying to light a nice ambient fire only to be choked out by plumes of smoke filling the room because the chimney flue isn't open or the chimney is clogged with debris. Face it guys, that would be my luck. Also when I think of having a chimney sweep in my house I think about the movie Mary Poppins...is that weird??

does anyone hear 'chimney sweep' and not think of Mary Poppins?? i mean, really.

You should watch out for that carpet. It could cause seizures.

I'm with Heinous! That carpet is insane!

Also, an American flushy thing? What do the English typically have?!

I gotta say, disappointed to see the american flushy thing. I was going to request photos and schematics of the english flushy buttons. Congrats on getting your life back in order....and INTERNET.

I am so jealous of the fireplace! I want one soooooo bad!

And I would find out how much extra the chimney sweep would charge to dance on the roof and sing "Chim, Chim, Cheree" because that would ROCK!

Welcome back! The house looks good.

Yeah! Welcome back! That carpet is crazy!

Where did the time go??

Looks great-thanks for sharing the pics!

Ooh, the befores! Can't wait to see the afters!

nice place. that carpet is sure something. Yikes!

Hey, I've missed you, girl! Glad you're getting it all together over there. How did Elizabeast and the poor kitty do with the whole quarantine/move into new house deal? Hope they're not pooping on the ugly carpet ;)

That's what SHE said.

Cute! I'm glad things are settling down for you. We're having about 75 degree holiday season around here. Blah! Miss you!

Thanks for showing us round - I'm with everyone on the carpet, yeesh!

Isn't it insane the way they use water from tanks located in the roof in the UK? I have a combination boiler, so water comes directly from the pipe underground, resulting in good water pressure.

It must be a relief to have finally moved in.

Nope. The second I read chimney sweep, I have visions of Bert dancing in my head!

Kat, you will have half the world convinced us English are still in the stone age.
That toilet flush is what everyone has these days - they used to be long chains from an overhead cistern but they went out years ago.

That carpet is what old folk have so they don't have to hoover often.

We don't have decent showeres over here - you have to go on holiday to Florida for them!

I'm guessing that bungalow was built in the 1970's judging by the fireplace - you don't really like it do you?????

and can I just point out that Dick van Dyke put on the worst English accent we have ever heard over here. So come the next showing of Mary Poppins, remember that none of us actually talk like he does!