All the Little Pieces

I am feeling much relieved today. Things are have finally started swinging in my families favor. We have a lease signed and keys to our new house. We don't have furniture yet, but that is coming on Friday. Sam the cat has also been rescued liberated picked up from kitty prison quarantine. I now have all my family on British soil legally. Huzzah!

It was no small feat if you remember correctly. I had the NW agent from hell. This lady was no picnic and it almost took an act of God to actually get my animals into the country. When I called the kennel to see if my animals had made it over to the UK I was actually shocked that they had arrived. Today was finally the day that I could go pick up Sam. I was supposed to do it yesterday, but in order to get everything accomplished to move into the house by Friday, we had to postpone. I felt like such a bad mother calling yesterday and asking Steve, the man who owns the kennel if he would mind keeping my Sammy for another night. He of course said it would be fine and actually suggested it would be better in the long run because they were expecting nasty rain the whole day at the kennel.

Today turned into a lovely drive through the countryside. The kids slept most of the way up to the kennel and we had borrowed a GPS navigation system from a guy who is going to be working in the same shop as my husband, so we had no real worries about getting lost. I got to take a few pictures of the landscape on the way up there, which I figure should keep my mother from pestering me for pictures for about a week. I kid I kid, actually she will be asking for more pictures in about three days. 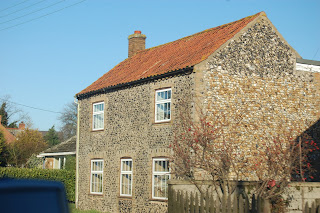 This is a typical house in the area we are living in. Most of the houses around here are made from either stone or brick. They have clay shingles on them and a lot of the shingles are covered with moss. Notice that most of the shrubs are still green. You don't get that much in the states during the winter. Also notice the blue skies, you don't get that much in England during the winter. 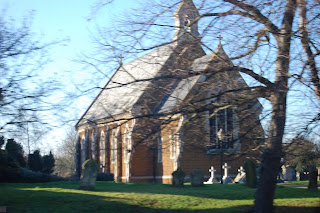 This is one of the many churches that I saw on the way up to the kennel. I love old chruches. I think it has to do with growing up in Charleston, SC. They don't call it the "Holy City" for no reason. There are churches all over the place in Charleston, but they don't have any this old I am betting. 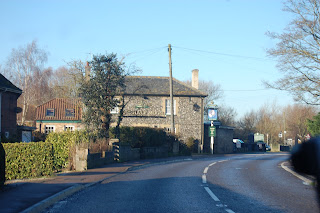 This is a pub that is located up the road in Lakenheath Village. It is called the Half Moon. Cute little pub. There are pubs everywhere here in England. My friend, D, was actually telling me about a place where she saw a sign that said "Pub located behind Church". Now THAT would NEVER happen in the states, EVER. Good Lord I could just see the riots taking place if that sign was posted anywhere in the Bible Belt.

I have seen a few funny Inn and Pub names here as well. There was the "Farmers Boy Inn", which just kinda sounds a little dirty. Then there was "The Cock" Pub. Now that one made my husbands inner 14 year old come out. He laughed his ass off for a good 2 min after we passed that pub. Then he decided the was gonna call his pub, "The Man's Head", another play on a dirty mind here*. All I do is shake my head, cause what I am I gonna do, I married this guy.
-------------
I have had a lot of questions asking how the girls are taking the move, well LaLa is doing alright. She misses a routine most of all I suspect. She, like the rest of us just needs her own space, her own (borrowed) bed, and a place to call her own. KiKi, well, she could care less as long as she has had a nap and has a full belly.

Everyday they fight about who gets to hit the elevator button to go downstairs. 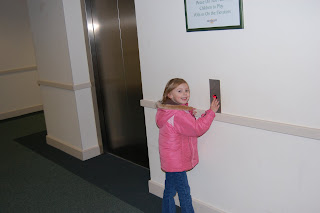 Everyday they fight about who gets to play with what toy. And then sometimes LaLa does something strange like this: 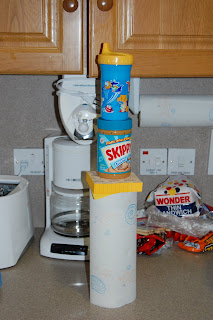 That is a roll of paper towels and stacked on top is: a pad of post it notes, a jar of peanut butter and one of KiKi's sippy cups. Just another one of the many things that I just shake my head at and accept. She totally gets it from her father.

*A lot of pubs are called things like "The Lords Head" or the "Lady's Head", don't ask me why, when I found out I will tell you. Oh and when you buy a pub, you can't change the name. They are passed down traditionally.
Posted by Kat at 12:00 AM

If there was church with a pub here in the states, I think I might have a reason to start going to church again. You know, for the "communion".

I enjoy reading about the interesting things they do over there. Hope you get settled in quickly.
Silly question..... Do they celebrate xmas this month?

I enjoy reading about the interesting things they do over there. Hope you get settled in quickly.
Silly question..... Do they celebrate xmas this month?

Glad to see things are looking up. The sun is even out (well, it is here, anyway) and you have a pub nearby. What else can you wish for?

I am so jealous of you now. I LOVE old churches, pubs and sightseeing. When Big K and I went to Switzerland I dragged him halfway down a mountain to see a church that was built in the 1300's. You are so lucky.

Glad things are better and you're getting the animals back!

I had heard about that tradition (passing down the name). I love it!

Sounds like things are really starting to come together! Congrats!

Churches should ditch all these ideas of having little coffee shops in their buildings and just have pubs. Church attendance would truly soar.

It looks so beautiful there! Glad you'll get to move in Friday and start to feel settled.

I'm jealous of your pub access. The line about 'pub located behind church' is awesome. One nice thing about the church back home is that they had their own social club. Who needs collection when you can rake it in off of Jagerbombs?

Your tales about life in Jolly O' England is interesting. I wonder if there are any people that go to those quaint old churches.

I just noticed that you became a follower on my blog. I just wanted to say that I am truly/honestly honored.

You mentioned wanting a copy of that particular doodle. Be my guest. I didn't mark that one as a "Copy & Share..." doodle, but that was only because I didn't think anyone would want a copy.

I'm glad to hear you're all there safe and sound and (finally) in your house.

Family + furniture + furry animals = fun. Fingers crossed it all keeps working out for you.

I am glad that you are settling in. Such a beautiful place.

Getting settled is a wonderful thing.

Drives through the country too. I miss doing that. Maybe we'll do it again before too much snow falls.

Glad you guys are starting the "settling in" process...

Maybe it won't take too long.

Me and your hubby need to hang out! :)

I'm with your mom - keep the photos coming, Kat!

Did colepack seriously ask if they celebrated Xmas this month? You can't let that go, you can't! Make up something crazy. Pleeeeease!!!!

Aww, Badass beat me to it ;( Pubs and church would go together like peanut butter and jelly, in my book.

The Catholic church here in the US should take a lesson!

Oh, I love the scenery! I am so jealous of your surroundings! What a beautiful area you're in! Glad to hear that things are starting to turn the corner for you now.

I love the pub names. If you are in London and go to Tower of London, there is a pub called the "Hung, Drawn and Quartered". The food is marginal but they have great beers and pictures of people that were hung, drawn or quartered at The Tower...well, not pictures of it going on...portraits of happier moments in their lives before the, um, bad stuff happened to them.

Up here in MN, away from the Bible Belt, we have bars that are closed on Sundays cause they are used as churches. Some parts of Wisconsin, two roads cross and guaranteed there is a bar on one of the corners :-)

Glad to hear you are getting settled in! I love hearing the stories of England through a Yankee's eyes!

How idyllic is that place??? Ohhh...I'm so jealous of you right now! Grrrr!

I love the comment from OhCaptain calling YOU a Yankee....I guess since you are an American in England that defines you as one!!!!!
XOXO
AA

There are loads of funny place names too - Piddletrethide, Giggleswick, Upper Downham to name just three.

as for Christmas.....I'm sorry I almost fell off my seat laughing at that Colepack!