Tuesday was my birthday. The big 2-8. Yeah I know, almost the big 3-0. Not that I am really paying attention or anything. We decided to keep things pretty low key around the Bungalow. I sent LaLa to school as usual and my parents, KiKi and I went to the Banham Zoo, which is about a 30-45 min drive away. It is just a small zoo, nothing big and fancy. I wouldn't consider it a "small town zoo" though. It didn't lack for animals at all. 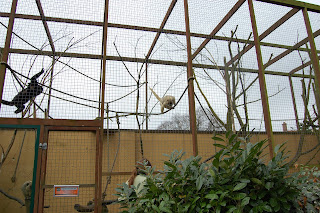 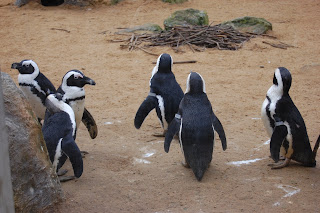 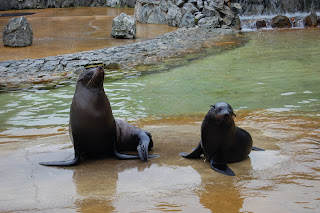 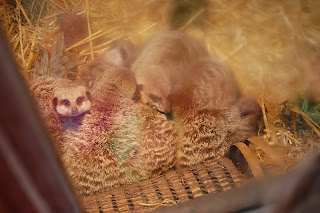 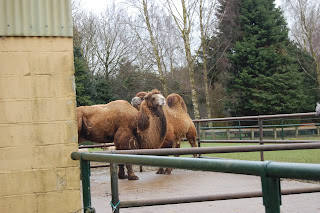 My favorite thing from the whole day was the Tigers! There was a mother Tiger and two male cubs. They were entirely too cute. The cubs were pouncing on each other and their mom. Running and biting each other. They were just like two little boys who were rough housing to blow off a little steam. It was great to watch. I also got some great shots of them. 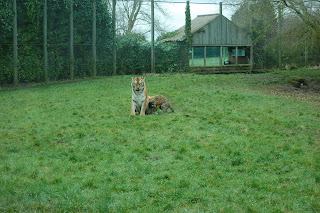 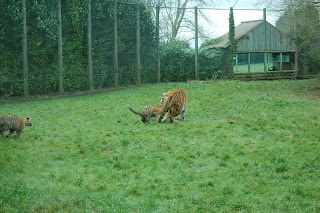 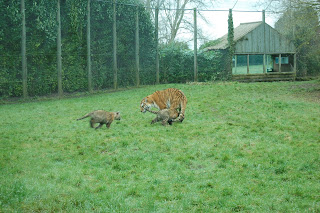 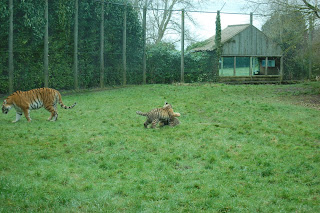 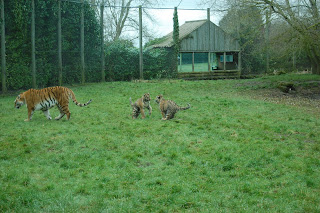 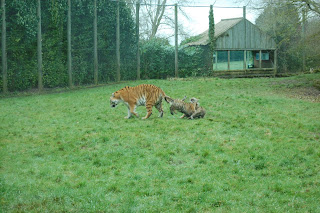 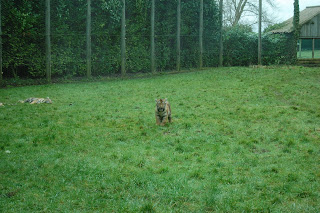 They were so much fun to watch. There were also giraffes, zebras, beautiful horses, tons of birds of prey, lemurs of all sorts, kangaroos, and leapards. It was an absolutely beautiful zoo. I really wasn't expecting much when we went there, but I got so much more than I expected. I actually think it was better than the Kansas City Zoo. Shhh. Not because of the animal selection, but because the animals were actually close enough that you could see them. There was also not a ton of walking distance between the animal enclosures. This made it a lot easier for KiKi to walk through and she didn't get cranky until the very end. That wasn't even because she was tired. It was because she was hungry. We could have got refreshments there, but we were close enough to the house that we just headed home and caught some lunch at the Bungalow.

To round of my birthday we went to the Bird and Hand. It is one of the local pubs. Fantastic food. I had the steak and ale pie. It was soooo yummy. Domino got me a really beautiful candle holder for my mantle, The Man got me a new belt that I desparately needed, and my mom and dad got me a new flat iron and blowdryer with English plugs. It was such a great day overall. Thanks to everyone who sent me birthday messages here on the blog and on facebook. Love ya'll! 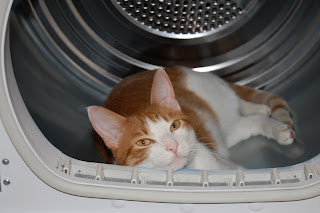 My own Tiger.
Hello Sam Kitty, what are you doing in there?

I love Banham zoo, I visited a few times when I was a child. It's lovely! Glad you had a good day!

Reads like a lovely way to spend your birthday, much more civilised than those spent nearer 20 than 30.

Penguins! Those are my favorite!!!

The dryer seems like a nice place to take a nap to me.

It sounds like you had a lovely day. Many happy returns :)

You really should have just thrown that tiger cub in your purse and mailed him to Savannah. We could totally share custody!! Glad you enjoyed your day!!

cute cute pics!!!
and tornados----I think that there is some sort of force built into trailers that draw them in....there has to be....no other explanation as to why they always hit the parks...

Awesome! I love the zoo. I also LOVE baby tigers. And kitties.

You're kitty is CUTE!

Meerkats on your birthday?! Lucky girl! Many happy returns!

Happy birthday! Any birthday where there are meerkats involved is truly a great day! Glad you had such a wonderful time!

The english plugs are a big thing aren't they? I totally hated the converters I had to use.

Happy Belated Birthday! I'd never thought about the zoos being more compact in Europe, but I guess they would be with space being at more of a premium. That sounds great to me. I get exhausted trying to walk all over the zoo here.

what awesome pics of the tigers.. I bet they were fun to watch! :)

Glad you had a good b-day! I love the zoo too!

Awesome day. I love the photos.

I want to go back to Europe. Hey! Could we leave the kids there? They'd spend the whole time in your tree looking at planes. You'd just have to throw food up there every once in awhile.

Looks like a great birthday all right! You so should have stole a penguin for me...

Happy Birthday!! Glad you had such an enjoyable day!

Dude, I missed your birthday as well. So , sorry.