We got a lot done this weekend and had a ton of fun doing it. The man room has finally become a place of beer and fun as opposed to the gigantic storage area it was. Well it is still a storage area but we have at least carved out a "Man Corner" as my husband calls it. He got the dart board hung and the furniture situated so that he has a nice place to put the computer for some tunes. We are going to get a stereo for out there, but that is gonna have to wait for a couple of weeks. 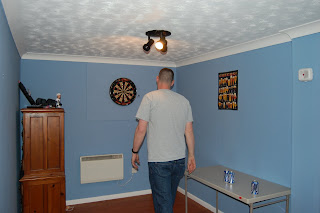 On Saturday night we played a couple of games. I had never actually played darts before other than screwing around and trying to hit the bullseye. Well apparently there are actual rules and different kinds of games of darts. Who knew? I lost all the games we played but by the end of the night I was getting the knack of at least coming close to what I was aiming for. 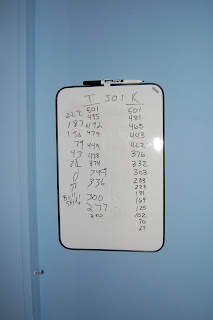 Enlarge for my commentary on losing. Yes I am a sore loser.

We also found a game that keeps the girls occupied for more than 5 min. 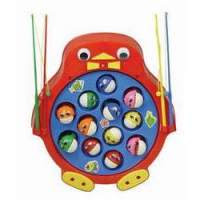 Who ever invented the fishing game is a genius! The version my kids got has more fish in the middle but this picture gives the gist. They actually sat there for over an hour playing this baby and didn't even lose any pieces.

We also bought a fire pit for the back yard. Hurry up summer we got some backyard get togethers to get to. Now we just need a propane tank for our grill. Mmm steaks! *drool* I am just so excited that the weather has finally started turning around here. The days are getting longer, the flowers are starting to bloom and today for the first time ever I took LaLa to school and didn't wear a coat. Spring is springing!

Finally last night we went to our friend's house for dinner. We got to let the kids play with kids that are near their ages and got some adult conversation time. Also J's spaghetti was awesome. I need to find out what kind of spices she puts on the hamburger when it is browning because it was so yummy. The Man actually ate all his spaghetti and he doesn't even "like" spaghetti. When we got home I gave him crap about it of course. "So you will eat all J's spaghetti but you won't eat mine?" His response was that hers tasted different and he liked it. Which means of course that I am gonna have to steal her "recipe" so I can make spaghetti like most other normal households.

So that is what happened around the Bungalow this weekend. I hope you all had spectacular weekends as well.

Bits- Mom there are little tiny bits in this.
Well done- Well done KiKi!
Posted by Kat at 2:46 AM

Your 'man' is either very tall or your ceiling is low! I don't play darts unless someone scores for me - I don't do numbers well!

I love that fish game too. I got a mini one for the plane a few years back.

I'm glad spring is springing, at last the end of dreary-ness. Is this a new thing to you Kat or is winter/spring the same over in the US - your weather seems to be one extreme or the other and little in between.

Grilling steak in the back garden....mmmmmmmm, cold beer and long lazy sunny days....

Fire pit, beer, fun, steak, I know where I'm going to be partying on the weekends now...

So when you punish him, do you send him to the Man Corner?

For some reason, I am very good at darts. I don't know why, but I seem to win every time. I still don't know how to really play the game, but John never invites me to play when he and his brothers pull the board out, because he doesn't want to look bad.

I hate spaghetti, too.

And I LOVE darts.

Crap, had to leave 3 comments. My phobia about leaving even numbered comments sucks sometimes.

Congrats on your man corner, The Man. When will the keg-er-ator be delivered?

OMG! I freakin LOVE spag! Sorry, just had to throw that out there...perhaps Lil Man will love it cause I love it!

Looks great! And my nieces have that fishing game, I love it!

Love that paint color! My husband still cries over the loss of his man cave.

We are building a fire pit out back this spring too. I bet ya'll will spend lots of time outside!

Oh, I love darts. I suck at it, but I still love to play!

I hate spaghetti too.

Are the ceilings really low in England or is your husband super tall?! Maybe you answered this...I should scroll down in the comments.

I spent the weekend watching some dog training show on Animal Planet (why? we don't have a dog...) that was filmed in England and I was struck by how narrow and small the rooms in each of the houses they filmed in were, and that the English apparently sleep on very small beds!

My kids played that fishing game until the thing was completely destroyed. They loved it.

Glad to hear you got out for dinner with friends. That can do a lot for my state of mind!

I wept with gratitude when I looked out my window this morning and noticed my flowers were starting to bloom. I'm so TIRED of winter.

The Man Cave is awesome!! I wish we had one:)

my kids got that game as a bday party prize and love to play with it. it is cheezy but they love it.