I Wanted to Melt into the Floor!

My kids had not had McDonalds in 4 months. They hadn't had much opportunity here, since unlike in the US, there is not one on every corner. Well actually there aren't many corners here anyway, more roundabouts than anything. McDonalds is one of their favorite restaurants EVER. I can just barely stand it myself, even though I get a craving for a Big Mac every once in a while.

We had a been in London for the day walking around. Everyone was hungry, everyone was tired and it was starting to get a little dicey in the attitude department on everybody's part. We couldn't all agree on a place to eat and I remembered that there was a McDonalds around the corner from our hotel. Everyone can eat McDonalds, even if they don't like it. They can grin and bear it and shut their mouths so that everyone is fed. When I mentioned McDonalds the kids were super psyched.

Ok here is a the lay of the land in this McDonalds. The place to order was when you entered. It was jam packed with patrons. The small eating area was located downstairs in the basement area. I am assuming that the floors above it were probably flats. My mother and I went to order while my dad and The Man took the girls downstairs to stake out a table to eat at.

When I got the food I realized that there was no way that I could make it downstairs in one trip so I took the first tray with the girls Happy Meals to the table. Then I went back upstairs to get the rest of the food. When I got back to the table I notice LaLa was FREAKING OUT. By freaking out I don't mean crying a little. No, she was wailing. Complete meltdown mode.

"What is her deal?" I asked The Man.
"There is ketchup on her cheeseburger"
"Crap! LaLa just eat it. It is only ketchup."

Apparently this was the wrong dang thing to say. Loud scream. The Man grabs her arm and she flings herself backwards out of her chair. The Man had absolutely nothing to do with the trajectary of her motion, she was just losing her damn mind right there in the McDonalds dining room. The Man picked her up and announced that if she was going to act like this then she wasn't going to eat at McDonalds at all. He marched her up the stairs.

I took one bite of my burger and then started feeling really bad for the poor kid. I mean have you ever had a time where you were expecting something, really craving something so bad that you were just fixated on getting what you wanted and you were looking forward to it so so bad and then you got it and it wasn't what you wanted. Pure devestation. Now I know all she wanted was a PLAIN cheeseburger. No ketchup, no onions, no mustard. Just a plain meat, bun and cheese burger. I had failed her because I forgot to order it plain. It was completely my fault.

I went upstairs to see if my husband had really removed her from the premisis. He hadn't. They were standing in line to get a plain cheeseburger. I was relieved. Once she got her burger she was happy as a lark. Ate the burger faster than she has ever eaten anything and was extremely grateful.

"Daddy, that was the best cheeseburger since Missouri!"

Glad you liked it little girl. Next time though, could we spare the dramatics? 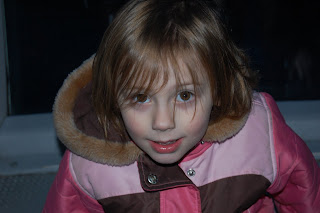 I do often wonder how, as an adult, we would react to little mishaps like this one. Perhaps I should wail a bit more often, might be good for the soul.

Heheee That was great. Usually I'm all for sticking it out and not giving in to a tantrum, but I love that the two of you both decided she should win this one. Good call. =D

Yep good call, sometimes it just has to be right and nothing else will do!

I still think you should try a spray water bottle.

Ahhhh.....meltdowns; I remember those well. I'm glad it all ended well.

ketchup on a burger has the SAME effect in our world.

It's like a traumatic ballet when a kid does that backward swan dive off of elevated surfaces. You can almost hear the Mozart above the "Omigod, that better be ketchup!" The Man diffused the bomb. Nice job!

There are some times when I'd like to be able to throw a fit when that kind of situation happens to me. Think anyone would think badly of me if I did? LOL!

Aaaww... I'd have probably taken her straight out. I guess I'm not too sympathetic when it comes to that sort of thing. It's just food. I get your point entirely. Something you've been wanting is there but just not right. We've all been there.

My children have never been to a McDonalds. Seriously. We live in a very small town with just two locally owned restaurants, so when you go to the bigger town over, we have several other restaurants we'd like to eat.

It's plain cheeseburgers or the world will explode at our house too! (We really do take alot for granted in the states!)

I love that you guys let her win the battle. I totally understand that pure devastation. I'm happy that shes happy that she got her bun and meat!

Ooooh. So only kids are supposed to do that?

My daughter had a very similar melt down about the same thing a few weeks ago.
Thank goodness it was at our kitchen counter.

What good parents you guys are.

What is it with that place. They alwasy mess up my son's chz bgr and when it comes with onions, it just about looses it. I hav eto start checking it before I leave the window.
Do they have fast food there at all?

Funny, I had McDs for dinner last night. Every once in a while the need for something quick and easy overtakes me, and there is really no other option here. Pret and all the similar stores close up at the end of the work day!

I'm afraid I'd have the same reaction right about now if someone brought me the wrong damn burger!

European McD's are far from spacious. That said most things are FAR from the size I am reaquainting myself with in the great U S of A. Oh how I miss Europe. Enjoy, I will visit again to read your adventures.

I had the SAME thing happen w/ the girl I nanny for. Complete melt down bc of ketchup on her happy meal hamburger. Darn McDonalds! Now I always check that thing before I walk away.

I'm with her--I think ketchup us some nasty business

A rolled up newspaper works - well it did on my dog.

Oh how embarrassing! My son does that- we can’t even take him out anywhere because he is so loud. He is “that kid” in the restaurant. It’s all about the take-out these days.

Yup, sounds like something that would happen to us. And everyone else that has children. So don't feel bad :)

I know EXACTLY what that's like. Although, one of these days she'll have to learn that life sucks and then you die. And there is ketchup on EVERYTHING.