"Flowers are as common in the country as people are in London."- Oscar Wilde
Our weekend in London was actually pretty uneventful despite the coke on the table incident at Burger King. We only had one more incident that would have been considered out of the ordinary really. While we were at a pizza place a woman came in begging for money. She was promptly asked to leave by the wait staff. When she left the restaurant she went up to a man to tell him she got nothing (or that was what it looked like). It was kind of strange. Having lived in DC for several years when I was growing up it was normal to see street performers and the poor panhandling but I had never actually seen anyone enter a restaurant and ask for money from the patrons.

While we were in London we did the normal touristy things. We saw Parliament, Big Ben, West Minster Abby and road on the London Eye. 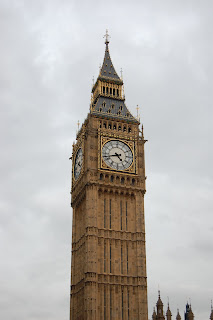 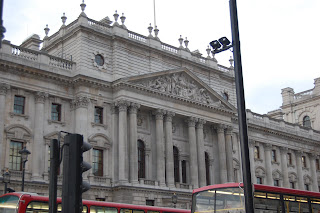 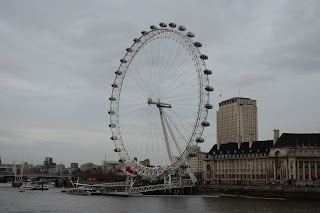 By the end of the day we were exhausted. We went back to our hotel room. The bed was lumpy and really low to the ground. But it was a bed. The next day we woke up semi refreshed and ready to take on the big city once again. We rounded up the girls and found a little cafe for breaky. Belgian Waffles yummmmm. It was really good, but really slooooow service. I think I could have gone behind the counter and made breakfast quicker than I got it. There was another traveler behind our table who ordered coffee. It took them 15 minutes just to bring him his coffee. I am pretty sure they had to go to Colombia to get the beans.

Next we headed to Kensington Gardens. There was a pond in the middle that had loads of swans and ducks. The girls loved feeding the swans bread and running around in the park. 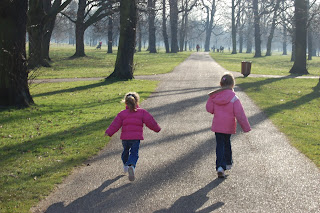 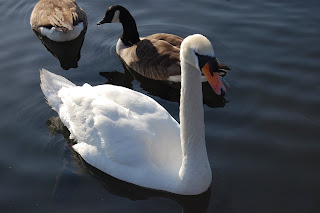 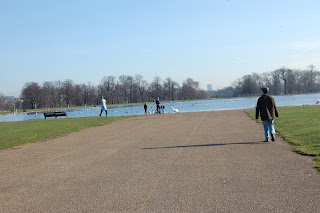 I think this was actually the girls favorite part of the whole day. They loved being able to run and play. KiKi loved that I didn't have to hold her hand. Those busy streets make me nervous with her. The Underground was so crowded that I was afraid that I would lose her on the platform or she would fall onto the tracks. So I was holding her hand or was carrying her a great deal when we were in London.

Funny/gross story about the Underground though. We were on the train coming back from one of the museaums, LaLa was sitting next to my mom and a younger professional woman. They were all holding onto the same rail to stedy themselves. The next thing my mom knows she hears the lady say "Darling, you shouldn't lick that pole!" LaLa was sitting there licking the pole she was holding on the Underground. Ugh! My stomach is turning just thinking about all the germs that were on that pole. It is a wonder the child didn't get sick.

We went to the Science Museaum and the Natural History Museaum, but they were so crowded that it was hard for us to enjoy ourselves. 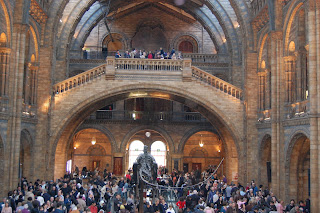 We decided to high tail it out of there and go back to Kensington Gardens so that the girls could see the swans. They seemed to enjoy that the best anyway. Overall we had a really good time in the city. It was fairly easy to navigate, people were fairly helpful when you would ask about directions or certain attractions. I plan on going back soon, when I don't have to tote the kids along.

Here are a few more pictures I took in London. Enjoy. 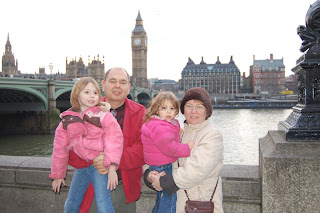 Mom and Dad with the girls in the background is Big Ben. 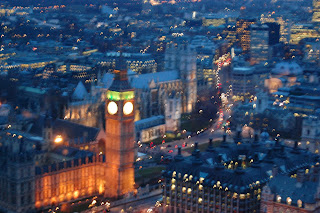 London seen from the top of the London Eye. 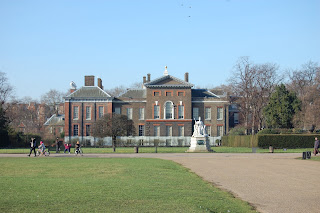 Pretty pics! Im jelous, but thats ok, its crawfish season down here in the boot :) gorsh them kids is getting big.

Me and the boy are heading into London this weekend, we're headed down a little early so we can do the museums on Friday, much quieter then.

But the rest of the post reminded me of when I lived in London; still one of my favorite cities in the world. I know, isn't that amazing? :))

Love the photo of the girls running down the lane. Sounds like you had a good time.

I am so utterly jealous because I can't wait to see London! My best friend is from England and I still haven't made it over there. Hopefully next year. I will have to look you up! (if you are still there, that is!)

I would liketo visit London sometime. My husband has been there and loves it.
Great pictures!

Can I come visit? I'll be quiet, I swear!

So gorgeous! I want to pop over there one day (did that sound British?!), but these pictures may be the closest I come to it!

Licked the pole! Ohhh gaahhh bleck! I think that is how kids build up their immune systems though! :)

It looks like you had a great time! When ever I hear someone talk about Parliament, I always think of National Lampoons European Vacation where they get stuck in a roundabout for hours, and the dad keeps saying, there it is, big ben and Parliament. lol

Love the photos! Would love to visit London someday!

Did you like the Canada geese? We gave them some a few hundred years ago as a present from our country. Now they're like freakin rats. Mwah ha ha haaaa!

Sounds like such a good time! I had the same reaction when Sprite decided to lick the length of her sippy cup. And I KNOW where that cup's been! I just don't want to know what else she's done that to..

I lived in London for a couple of years and loved the buzz of the place. I keep meaning to take the boys but haven't got round to it yet.

I used to stay in a hotel on visits there for work where at 6am every morning the household cavalry exercised their horses down the street infront.

I remember the flowers infront of Kensington Palace when Diana died. So many.

Oh the memories. Thanks for the pictures.

Remember how you once said you gave your poor girls stripper names.....now you wonder why they are licking the pole? I'm sorry. It's the first thing I thought of!

Glad you had fun! We missed you!

Pole licking..sounds like something you and your brother would have done at that age!!hehehe
Looks like a great time. Is the leg re-attached on the puppet yet?
xoxo

It looks glorious. What great memories for your children. And what great pictures you snapped!

Your parents are so cute!