You Have Been Warned! 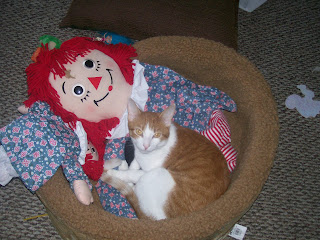 Do NOT let this cuteness fool you! This is Sam, the feline member of our family. Yes, he is a bundle of cuteness, but this cat on more then one occasion has made me want to pull all my hair out. The third day that we were living in our current house he chewed our mini blinds. You know the mini blinds that are US govt. property. The mini blinds we now have to replace. The next day he broke a $30 candle holder/vase.

When we found out we were moving to England, we had to find out about the quarantine laws for our pets. You have to start the process to avoid quarantine 6 month in advance of the time of arrival in country. Well the day before his blood test to start the 6 month process, Sam decided to disappear. I was beside myself. This cat that I have had since he was seven weeks old was gone. I cried and cried. I missed the little bastard more than I cared to let on. I was a mess. Well two weeks later after fruitless searches of the neighborhood he decided to wander home. Of course now he was late on the whole getting to England process and he will have to be quarantined for approximately three weeks once we arrive. See this cat is an endless money pit.

He does have redeeming qualities though. He follows me in the morning during my morning routine. He meows at me to turn on the sink so he can get his morning drink. He sits on the edge of the shower while I am in it and bats at me through the shower liner. For kicks sometimes I knock him into the shower with me, cause I am mean like that. He also is good with the kids generally. They can hug and love on him for a while before he tries to bite them. Definitely more tolerant than most cats I know. Sometimes he even snuggles with the dog. "The Man" actually likes Sam. I guess I really love the little booger too. I just wish he would quit trying to escape out of the house like we are running a Kitty Gitmo.
Posted by Kat at 7:04 AM

No matter what people say, cats are sooooo smart. They are slippery little suckers too!

My cat does the shower thing too. I'm thinking you're sweet on the cat too. He's going to have to go a long way to get on your bad side.

Yes, I agree. Cats are smart. But they are also evil. Every bad guy had a cat. Dr. Evil? The guy from Inspector Gadget? (I believe that cat's name was Hiss.) And the guy from James Bond. All evil. Therefore cats are evil. And smart cuz they hang with the evil. The end.

Wonder what that cute cat of yours was out doing for those two weeks he was out living large! Some days I'd like to escape for a couple weeks!

Look out! He's holding ragged Ann hostage! He's going to go have to an underground kitty prison instead of Kitty Gitmo. lol

I have to agree - cats are smart
but PURE evil.

Kitty Gitmo! Hahaha! You know, we have two cats. The female is smart. The male, not so much. The female loves to knock cups of water, bowls of anything off the counters. She's smart enough to run and hide. The male cat comes out to see what the ruckus is and gets busted snooping around in the remains. She has it out for him.

You know, I just have to say that I appreciate you stopping by and saying your kind words today. You and the Captain are my first bloggy friends. Your comments (and saturday mixes) always make me smile.

All cats are moneypits. Every single one I've had has cost me a fair chunk of change over the years.

Hmmmm. Maybe he knows something you don't know... Maybe he's heard those Limey cats are MEAN.

When I come back from the dead, I'm coming back as a cat! They have the life (as long as they find suckas like us who bring them into their home and let them destroy things)!

That stinks that you've got to lock him up for three weeks.