My brother and I had this thing we used to do when we were kids that was called "Feet Fighting". It is played by laying on the couch and pressing your feet against the other person's feet who is also laying on the couch. You count off 3,2,1, and then you try to wrestle your opponent into submission using your feet...which would be when they have their knees up to their chin and you have your legs completely straight. My brother and I used to be able to keep ourselves occupied for quite a while playing this game. Now I have passed it down to KiKi. 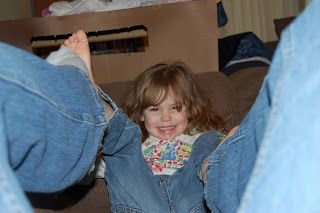 Oh and look what I have parked in my backyard! 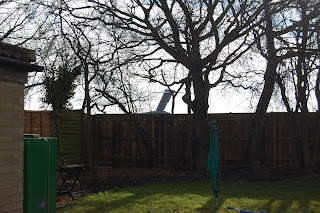 Click on Pic for the full effect
I think it is a c-5 Galaxy. Which in case you guys didn't know is one of the largest military aircraft. This sucker is huge. Captain Dumbass your kids would have a blast here watching all the aircraft. I have everything from fighters to cargo aircraft all around me. It is funny, LaLa, knew what an airplane and helicopter were before she knew what a fire truck was. Just a byproduct of the environment.
Posted by Kat at 3:36 AM

My brother and I played that as a kid too!!!! Thanks for the memory!

I played that with my sisters all the time!! Great pic of it!

And LOvE the aircraft in the back yard. My oldest would just go nuts... one of his best moments was getting to meet the pilots of C-130 and getting to sit in the pilot's seat and walk through the back.

One of my fondest is getting to see an SR-71 Blackbird at the Kalamazoo Air Zoo Museum. So awesome!!

Nice plan in the backyard!
My sister and I used to play a version of feet fight. Fun stuff.
We also used to try and put our feet and hands together in a swimming pool, bump butts and then both do backflips. It was hard and I don't know that we ever got it right. But we sure had fun trying.

I love your new digs! How awesome.

I love feet fighting but had forgotten about doing that until you mentioned it. Hopefully it's not too late to get my 8 year old started on this game.

What a pretty page you have here! I am so jealous!

We used to have feet fights too! I had forgotten about them. Probably because I often lost. I must be blocking out the memories!

Wow, feet fight brings back memories! Right now, my toddler is all about face fight. If she can stick her fingers in your mouth, she wins. If she can steal the glasses off your face, she wins. She doesn't like to lose.

What? You are just now getting a backyard airplane?! Der, like EVERYONE has one of THOSE. Puleeze. LOL, just kidding, yeah, I wouldn't wanna hear that thing crank up and you KNOW it is going to happen about 5:45am.

OMG! I'd forgotten all about foot fighting! My sister and I used to foot fight all the time! I'm almost afraid to introduce my boys to the game, though!

Me and my brother used to play that game, too! We stopped after I somehow kneed myself in the chin and almost bit my tongue in half.

Mr. Splodge and I foot-prod occasionally...a milder, more ticklish version which is completely baffling to our son.

The mind boggling jet behind your garden fence puts our boring car park to shame.

My boy would be overwhelmed. He loves jets, and especially "L-coppers" as he says.

Suh-weeet! When I show this to Connor after school today he is going to want to come over to visit. Do you have room for four? I could go on about how much the kids would love that, but I'd be giddy as a school girl myself. And I grew up near an airport so the noise wouldn't bother me.

Hahaha, I love the airplane in the backyard - awesome!

That is one big honkin' aircraft! I can't remember if they have been around since the '60's, but my Dad used to be a cargo loader for them, I think, and C-124's back when he was in the Air Force. I remember him telling me as a kid about how they used to DRIVE trucks and jeeps and other large vehicles into those planes. Humongous!

wow, that is some airplane and what a nice backyard.
I am so going to have to teach Hayden 'feet fight'

Big K does this to me when we're lying on the couch. It drives me nuts!!

Plane? What plane? I was too distracted by the green grass. It's been so long since I've seen anything like that!

My 3 brothers and I use to have feet fight tournaments which resulted in quite a few busted lips. Good times... Good times.

Glad to see someone else's garden (please tell those foreigners to stop calling it a back yard - over here a back yard is an expanse of concrete.)looks as dreary as mine - at least you have something to liven it up a bit!

I'm not going to pass feet fighting on to my two. I'd be at A&E every five minutes.

Looks like we're making a trip to the Flight Museum in Seattle again. Thanks, Kat.

Unless, of course, you get that air mattress.

I should teach feet fighting to my boys.. maybe it would keep them from punching and kicking each other in the balls so much..

Alas, I was an only child so I never played the Feet Fight :(

I feet fought my way through childhood, and now I've passed it on to my son. I let him beat me most of the time, but it's a great game!

Love the back yard!

HAHAHA! WOW. I've ridden on one of those and I would prefer not to do it again. Speaking of planes, my hubby just started taking lessons to get his private pilots liscense for a helicopter. I think he just likes to do stuff that gives me heart attacks.

wow, we played it to but called it feet wars.
What an interesting expereince for the kids to have planes like that in the back yard.
cool

My siblings and I used to do that. It was really just an excuse to end up kicking the crap out of each other. Ah! The good ol' days!