The Hardest MeMe Ever!

This is a Meme that Jim over at Irregularly Periodic Ruminations tagged me for. I must say it is a daunting list of interview questions! I however am going to tackle this list of interview questions like Lawrence Taylor did Joe Theisman. Yes I am gonna break it's leg! Oh don't watch that video if you are squeamish. Seriously you can hear Joe's leg break. Ok, back on topic! The Meme. See I am procrastinating right now, because the first question alone has me really thinking hard. Ok I guess I have wasted enough space up here, time to get to the questions.

What is the bravest thing that you feel you've ever done? Physically, emotionally, or whatever.

I think the bravest thing I have ever done was leaving school to move to Texas when I was 21. My husband was in tech school for the Air Force in Witchita Falls, Texas for 6 months. After he had been there for about 2 months, my parents and granny loaded all my stuff into two cars and we headed from Charleston, SC to Texas. Now it wasn't exactly the move itself that took the bravery, it was the fact that it was the first time that I would live a significant distance away from my family. To say that I depend on my family a lot for emotional support would be a gross understatement. My family is my world. They are my rock. They are my sanity when the rest of my world is insane. Leaving that comfort zone (against my mother's wishes) was the bravest thing I ever did. Since then I have moved even further from home, but without that first step I would have never had any of the adventures that I have had.

What one talent do you wish you had that you don't?

We all have our reasons for blogging but what would be your ultimate goal for your blog or as a blogger?

The ultimate goal I have for my blog is for me to have an outlet for me to put all the pent up mental energy into. The comments mean the world to me, but ultimately I write for myself. Sure, I think about what readers might want to read about, but if I don't like what I am putting onto the computer screen, I don't publish it.

You can trade lives with any one person for a month. Who would it be and why? 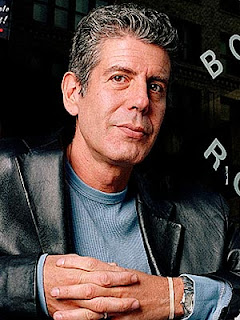 If I could trade lives with one person for a month it would have to be Tony Bourdain. Ok, I don't want his body but I want his mad skills and travel opportunities. I mean he is a tall lanky semi unattractive 50-somthing year old guy, but the man can cook, he travels all over the world, and he gets to have the most awesome experiences that I have ever seen. If you have not checked out his show on the Travel Channel called "No Reservations" I highly recommend it. I also want to be able to steal his wicked wit and sense of humor.

There's a fire and your family is safe but you have the chance to save any one item from your house. What would it be and why?

If I got to save one item from my house it would be a painting that I have hanging over my fireplace. It is called "Tara" and it is by Jim Booth who is an artist from my hometown. When the sqeual to Gone With the Wind called Scarlett was filmed in Charleston, Jim went out to the movie studio's facade of the plantation house they had built on Johns Island, SC and painted it. It is a beautiful piece of artwork. This was also a very special Christmas present from my Granny.

You have the chance to go back in time and warn yourself before making a bad choice. What choice would it be and what would you tell yourself?

Ok now whoever would like me to ask them some questions (not the ones above), leave a comment that says something along the lines of interview me, send me some questions, or whatnot. I will try to get something sent to you as quickly as I can!
Posted by Kat at 12:00 AM

A frog trying to be a bird? You clearly don't listen to popular radio. That's what most of the shit out there sounds like already.

No Reservations is a great show! And I agree about his lungs getting a break. Oy, the smoking! Great questions and great answers!

Cool Blog.....I saw your comment on DD2's blog.
And I think your ARE awesome

Well done. It's like writing a college paper. I'm anti-debt too. In principle and in practice. AND I'm anti-crap. Although that's even harder.

I had a big mouthful of beer at the moment JT got his leg broke, I still don't know how I manged to swallow it and keep it down...OHHH that noise!!

Very cool post, Kat. Intriguing insight into the mystery that is you. Your choice of person, very interesting. Have you read the book "50 Last Meals" by Melanie Dunea? (http://lartculinaire.wordpress.com/category/anthony-bourdain/)

He did the intro, and has a picture in there described thusly:

I do not recommend having a mouthful of beer when you see this picture, trust me..

I think moving to Iowa (away from my family) was the bravest thing I ever did.. it didn't really feel that brave (I guess I expect something brave to feel scary?) but I can't think of anything else.. and everyone told us we were brave for doing it..

I share the same philosophy on blogging.. my blog is for me first and my readers second. If it stresses me out and isn't fun? it's not worth it for anyone!

I feel terrible that I was suppose to do this to you weeks ago and haven't had the time. Now I have some ideas for my questions that I hope to finish up this weekend.

BTW - Gone With the Wind is my favorite. I read it every summer and follow it up with Scarlett.

I have the same interview in my inbox and you answered so much better than I ever could. Awesome answers to some really awesome questions!

That is a very brave thing to do. Lord knows how mama's can pile on the guilt!

I totally forgot about the whole credit card thing when I did my questions. Yeah, I think I would go back and tell myself not to get a credit card at 18 years old and rack up enormous amounts of debt I couldn't pay back. Good call.

I am SO ADDICTED to the travel channel. But really just to Samantha Brown. I totally dig that chick. I want her job.

Since I've put in my interview orders all over the place, I won't burden you, too.

Credit cards, yeah, definitely with you on that one!

Please try my Blog at:
The Patton Doctrine
http://www.pattondoctrine.blogspot.com/

Okay, so I'm going to go ahead and drink the haterade and admit that I despise Anthony Bourdain. I think it't is near constant smoking. It just groses me out. But, he does get to eat lots of good food.

Interview the shit out of me, yo! I am totally out of blogging ideas for the moment.

Oh please send me over some interview questions...I love that kind of thing. Gosh, I'll never forget the Thiesman snap on MNF as long as I live.

My partner in crime would have emailed this to you tomorrow, but we operate a site called Sunday Stealing and this Sunday we steel your meme. Every week we search the blogosphere and steal someone's meme. We give you full credit, of course and provide a link back to your journal. We are the most popular Sunday meme on the internet. We have 30 some players who do our memes. In fact we invite you to join us in future weeks. We have a great bunch of bloggers playing, who comment on each other's memes every week! A lot of our previous "victims of our theft" are now weekly players. It usually publishes between 8 PM Saturday night (EST) to Sunday at 12 AM(EST)Thanks a lot! Have a great weekend!

But you got a cool blog. I hpe you like our site-
Bud

Great Answers -
I am sooo with you on the credit card thing. They are root of evil.

that was a difficult meme but you nailed it. hehehehe, sorry that phrase is just funny to me and no is no the beer typing ok maybe. Sorry, I am done now.

I enjoyed reading this interesting Post....inspired answers to difficult questions.

If you aren't exhausted by now I would like some questions too but don't worry if you've run out of enthusiasm!

Thanks for the meme! We had a great response for it today. Happy Sunday!

Dang, this meme it traveling faster then herpes at a college party.

omg! I hear you on the credit card thing! I am still paying on outfits that I bought in 1997!!!