When I Went To Savannah I Didn't Get a T-shirt, but I Did Wind Up Getting a Tetanus Shot

So about once a year I take a pilgrimage down to Savannah or my buddy Jess shleps her rear end up to Charleston for our one night of awesomeness. This night usually involves multiple bars, friends, beer, more friends, more beer, and usually ends up with someone singing karaoke. There was no karaoke this year, but we did have a blast.

This year I went down to Savannah. Jess and KK (and their cats) were my most amazing hosts (though of course I missed having Bobby* in the house too) and provided me with the "magic couch" to rest my weary head on after our night out.

We started the night by heading to the local mexican restaurant and munching down on some fantastico food. All the while being entertained by a drunk flamboyantly gay man** and his girlfriend? Friend? Partner in crime? Who proceeded to dirty dance and grind upon each other like it was nobody's business in a CROWDED restaurant. They ended up getting kicked out and our waiter came over obviously slightly embarrassed and explained "Too much tequila". We of course were just embarrassed for them because good LORD, who does that?

After that we headed to the local sports bar where we called the troops (all the friends that I mentioned earlier) and decided what the game plan was for Jess's friend Ben's birthday. We had a beer and then went back to Jess and KK's place to get ready for the real night to begin.

(At this point I am going to take a bit of a sidebar from the story... Jess and KK have their own taxi driver. They don't call the company and wait for a driver to show up; they call one of the owners of the company and he comes to drive them downtown. Now, this seems like the most awesome set up ever right? Well it is, other than the fact that the cab driver is dumber than dirt and talks ALL. THE. TIME. I mean talks more than I talk and that is a lot. He means well and you can tell he is a nice guy, but....)(and now you will all look down on me for speaking the truth, but it's ok.)

We ended up going to Wild Wings (a chicken wings place/great bar) for a while, then heading across the street to Pour Larry's. I liked Pour Larry's, but the lines were horrible to get a drink. I ended up making friends with a guy at the bar and then switching seats with him in order to get served. Then his friend asked me to show him my boobs, which pretty much ended up with me shutting him down by saying I was married. (Man, that shuts them up every time***.) It didn't really matter much, because we were soon off to Bar/Bar where these pictures were taken. 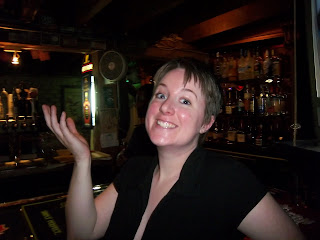 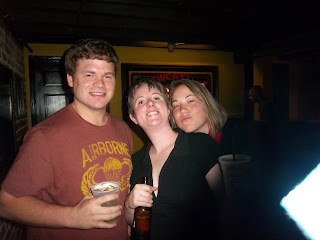 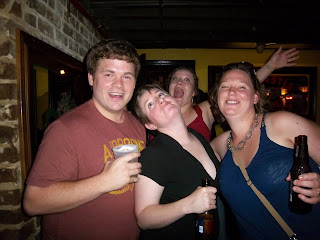 Matt Damon (I mean I really can't remember his name), Jess, Larkin and Me 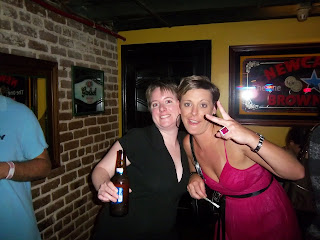 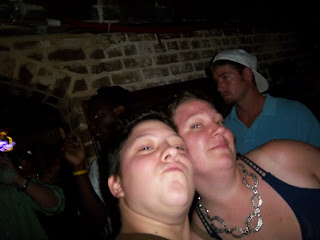 KK (I remember her name) and Me

Everything was going right as planned until I went to the loo. I got stuck in the cubicle. I mean I really really got stuck. I pushed and pushed and pushed on the lock until it finally gave. When it did finally give it gave me a cut on my finger that was pretty nasty. Of course I didn't want to make a big deal of it, but it really hurt. I went to the bartender (Christine, another friend of Jess') and asked for a bandage, but they didn't have any, so I sucked it up. One can't ruin the party because of a little cut.

We ended up getting home (thanks to our on call talkative cab driver) about 1am and we crashed out around 2am.

The next morning I drove back to Charleston and showed my mom my battle wound. We went back and forth and then I decided to be safe I should probably go get a tetanus shot. I don't care who you are but getting your finger cut by metal in a bar is never a good thing. Of course it was totally worth it though.

*I don't know how I didn't end up with a single picture of Bobby in my camera.
** Who Jess and KK recognized as being a guy who was once in every single one of their pictures on a night out...
*** Actually, I think that was the first time I have been obviously hit on in a bar since I got married.
**** I feel really bad that I can't remember Matt Damon's real name.
Posted by Kat at 12:00 AM