RTT- What The Frankfurter?!?

It is Tuesday, that means it is time for some mind randomness which is Random Tuesday thoughts. Better known as Kat's therapy session for the week. If you would like to participate click the button head to Keely's place and add your randomness with Mr. Linky.

I had a dream I was an illegal immigrant in Turkmenistan (it is over there near Afghanistan). Oh that isn't the weird part...I worked in a restaurant where the specialty thing was really good British bacon and Britney Spears came in to eat at the restaurant.
Speaking of Britney I was sitting in traffic (absolute stand still traffic) on the was home from dropping my parents off in Epping (the closest I drive to London) at the Tube station and I was listening to Radio 1; then I heard the funniest/most absurd thing I have heard in a long long time. Apparently BBC 3, was running a show on Sunday called "Britney Spears Saved My Life" Did you just cock your head to the side like a confused dog like I did? Yes you read that right. Oh and that is not the best part. Then they played an interview from the show on air. I must have looked like a complete nutter in my car because I was laughing so hard I had TEARS running down my face. You can watch the interview on YouTube here. Yes, I actually took the time to hunt it down. The things I do for you people... Go watch, I'll wait. Now tell me those people aren't completely insane.
LaLa and my husband were playing Wii bowling the other day, first of all lets say LaLa has a very unique but effective style for bowling. It is like a whirling dervish that has been let loose on my living room with deadly accurate Wii bowling skillz. She bowled a 179 and beat my husband by like 30 pins.
Do you know how hard it is to find brown leggings and a brown shirt in the middle of summer with a weeks notice? LaLa is supposed to be a monkey in her class play and had to have brown clothes. I ended up dying a white shirt and a pair of light pink leggings brown. Score one for resourceful mom.
KiKi has all of a sudden become extremely affectionate. The other day I found her pinning LaLa down planting kisses all over her. LaLa was laughing and trying to resist. "You will take my kisses and you will like it damnit!" She has also forced her affections on the dog. Poor Beastie. 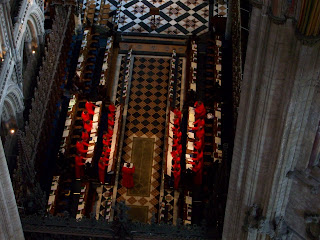 My parents and I got to hear choir practice at Ely Cathedral while we were on the tour of the Octagon. Angels. 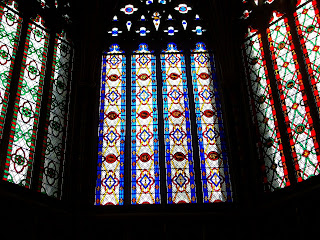 This is the Octagon. The first picture was taken while looking down from this. If you ever come to England, or are in Cambridgeshire, go to Ely Cathedral. This is a command.
So there is this show on Playhouse Disney called Handy Mandy. It is about a guy named Manny (short for Manuel)(don't get me started on the implications of a Hispanic handyman) who has magical talking tools who goes around fixing the various problems of his hometown of Sheetrock Hills. One thing has always perplexed me...they never show the "customers" paying Handy Manny. Nor do they show the customers when they realize that the over inflated repair prices are going to totally screw up their budget for the entire month and they are going to be living off of beans, rice and Easy Mac for the next two weeks.
Let's also take a moment to remember the London Tube bombings that happened 4 years ago today. There were 52 fatalities in that act of terrorism. Let's pray it never happens again.
I feel better now.
Posted by Kat at 12:59 AM

I too laughed when I saw in the TV mags the programme about Britney Saving peoples lives - brings new meaning to the term '15 minutes of fame'.
And I'll join you for that silence for the 7/7 bombings - so tragic.

Continue to pray it never happens again; you're definitely a resourceful mom!

Love Ely cathedral. Do they still have the craft market in Ely? I remember going as a kid, my parents live not too far away from there.

Can't believe it's really been 4 years since the London bombings. I remember the day so vividly, my uncle works in London and we were all terrified he'd been caught in it. We were some of the lucky ones as he'd gone to work early that day and missed it.

I detest Handy Manny, I'm really not sure why. I always turn off the TV when it comes on. Thankfully the kiddo isn't a fan either.

I never would have thought to die something like you did. You're brilliant!

Those stained glass windows are exquisite.

Hooray Octagon tour in Ely! Miss you--been completely devoid of normal internet access for a few days and it's NOT GOOD!!!!! Back Sunday :-)

That's right. It's those "handy" people who have caused me to take home repairs into my own hands. In addition to eating Easy Mac, there are some burn marks on my wall from when I tried to change an outlet.

The only thing Britney Spears ever saved was Kevin Federline, from looking more like a douchebag.

And LMAO at your musings over Handy Manny.

Funny, you clever mom, you!

Prayers indeed for those affected by the London Tube bombings.

I am Harriet said...

Brit saved someone? I'm having a hard time buying this one.
Thanks for the reminder on 7/7. With all the Michael Jackson coverage, the news is pretty slim on anything else these days.

British bacon? How is that different from Bacon bacon?

And, Handy Manny? Oh, we got him over here. In one episode, he gets a new flashling (Flicker) and his other tools are all, "WHAT? A talking flashlight? Flashlights can't talk!" Hammers? Yes. Screwdrivers? Yes. But a flashlight? Heck no! Where's the logic? Why am I searching for logic in a Disney show?

That for some reason reminded me of the dream I had the other day where a tiger ate my dog. Talk about Random.

Didn't you know; nobody ever gets screwed over by handymen on television. And they never have to pay them either.
Nice post.

It's true. I am who I am today because of Brit Brit.

This was a great random post! Visiting from RTT.

I love all the pictures and will definitely have to check out Ely cathedral if I ever get to London!

I will go the the Ely Cathedral. You know, if I'm ever in the neighborhood!
(PS ~~ wish I could! It looks beautiful!)

HAHA yes you are totally currect about Handy Manny and what is up with the guy with the cat.. so wierd!!!

It sounds like Lala has the same Wii bowling skillz as my grandson. Does she do a little 'in your face' dance too?

The pictures of the Ely Cathedral are beautiful. As for the video, those people need serious help. My daughter also kicked my husbands but on Wii bowling! Happy Random Tues!

Wow. At least those people are having fun, right?

They just never manage to show the darker side of home repairs on childrens shows properly...

Lovely picture...your random posts are always very interesting!
And so score for the resourceful mom!

OMG (like the guy said on the Britney show). Were they a little dense for college students?
Beautiful Cathedral! At least you are not watching Barney.

The cathedral windows are divine!

That was pretty smooth to dye your clothes! I wouldn't have thought of that...I would've run around in a panic screaming for Britney Spears to come and save me! lol!

I love your Random Tuesdays!

Wow it's really been four years? Tragic prayer and thoughts go out to the families.

LMAO at the Britney fans! Ach bless they're a few crayons short of a full box aren't they.

Quite the crafty mum turning pink leggings into brown monkey leg like leggings.

Opps not Tragic prayers, I'm horrible at grammer..lol There was supposed to be an exclamation mark after Tragic. Sorry!

Well, if you ever watch Imagination Movers, they rarely have customers. How do they handle the overheard to keep the place running?

You totally need to take a video of that wii bowling move!

I have always wondering myself just how the customers pay "Handy" Manny.... hmmm... interesting..

I can't get into the wii thing, I feel like a fool! Also, there are a lot of attacks that have gotten overshadowed by 9/11, it is good to have people like you to remind us!

My man and I have a running separate soap opera going on about Handy Manny. It goes something like this:

Kelly is in love with Manny. He also loves her, but is too busy servicing the rest of Sheetrock Hills to pay much attention to the fact that she loves him (don't even make me get into what I mean about "servicing." Let's just say that Mrs. Portillo is getting something other than handyman work for her baked goods). But Kelly does stalk Manny. Think about it... she ALWAYS shows up and ALWAYS just HAPPENS to have what he's looking for???? How else could she know all of that if she wasn't stalking him? And don't even get me started on Mr. Lopart! He's a whole other soap.

There are so many things to comment on here. Let me start with the fact that that was one weird ass dream. I'll be back.

ROFLMAO!!!! Those two kids belong in the same category as the things I've seen lately that ended up on my RTT. And I have seen some very ridiculous things lately, just this weekend I saw.. well, you can see my RTT if you want. It's as absurd as that video you linked to. Chore... Choreeeo... choreographing!!
LOL!!

I always KNEW britney was Mother Teresa in disguise.

very resourceful. i don't think i would have come up with dying clothes brown.

What are you eating before you go to sleep at night?

My kid saw Handy Manny for the first time last week but I didn't notice him getting short changed. Manny has to speak up and demand payment for his services or get a good collection agency or something.