Warning the post contains random things that are floating around in this mixed up mind of mine. There is no rhyme or reason to this post. So please excuse the discombobulation.

It is a nice chilly and quite soggy sunday morning here in England. I think it is somewhere near 40 degrees outside and very cloudy. I think it must have rained earlier, but I wasn't awake to see that event. In any case I think most of my day is going to be spent indoors, not at the hotel hopefully, but indoors in any case. Yesterday we spent all day inside the hotel, well when we weren't hunting for the blue folder that has been lost in the mix of shuffling between here and D's house. There was nothing EXTREMELY important in the folder, it is just annoying to lose something and my husband got his OCD on and was hunting for it all day long.

Anyhoo, last night we were completely bored and not at all tired after the girls went to sleep. I suggested watching a movie, he wasn't feeling it. Next thing I know this game was on the computer screen. Flight of the Hamsters? Yes. I was in stitches laughing at this game. Concept of the game is to get the cute little goggle wearing hamster to fly as far as possible, using the rockets, hamster balls, and springs to your favor. I am serious folks.

Speaking of hamsters. I am not really a fan. I used to work in a pet store when I was in college and those little bastards are mean. When I used to place the food dish in the cage of the little Siberian Dwarf Hamsters, those little wolves would cirlcle my hand like it was a Christmas ham. I took to wearing a gardening glove when I would feed the hamsters in order to prevent their little rat razor teeth from biting me. I used to try to get people to buy gerbils instead of hamsters because I thought that the hamsters were so vile.

Couple of Things About England that I am Befuddled by:
-OK, I understand that their is a law that you can not have any type of drink while you are driving in England, but seriously, no cup holders? Last night I went to get dinner for my husband and I (the kids had had chicken nuggets) and I had 2 drinks to get home. I ended up carrying one drink between my legs and holding the other one on top of the emergency break while driving and hoping that I didn't A) spill either drink in my lap and in the rental car and B) wreck the rental car on the way back to the hotel. I made it back to the hotel with both car and cups intact but I couldn't help to think that this would have been a whole lot easier if there had been at least one cup holder.

-The toilets here have a button on the back of them to flush not a little handle on the side. I keep reaching for the side of the toilet to flush. Oh and some of the buttons are split in half. Push one half to do a little flush, push both to do a big flush. I guess 1 for #1 and 2 for #2.

I got an award from Mama Dawg over at Two Dogs Running. Thanks MD! This award apparently comes with rules. You know how I feel about rules, but since Mama asked nicely I will comply. 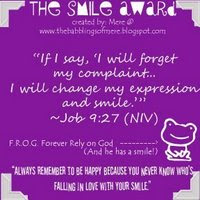 The qualifications to receive the award are:

A. Display a cheerful attitude. (Umm if you say so..)

D. Learn from others. (Why do you think I read so many blogs?)

E. Be a positive contributor to the blog world. (I am a contributor, not all of it is positive, but I contribute none the less)

G. Love kids. (Mine yes, but sometimes only because the law says I have to)

1. Must link it back to the creator.
2. Post the rules.
3. Choose 5 people to give it to.
4. Recipients must fill the characteristics above.
5. Create a post to share this.
6. You must thank the winner.

The five people I give this to are, Tismee2 from Squared Off, Jenni from Oscarelli, Miss Grace from Miss Grace's Disgrace, Cameron over at Get The Stink Off and Cape Cod Gal from Diamond in the Rough.

Is this enough Sunday morning radomness for you guys. Good, I'm exhausted. Time for a nap.
Posted by Kat at 1:21 AM

I hate push button toilets! And toilets that flush automatically! I'm a girl! Sometimes I need to flush at my own pace! lol

Aren't you adorable! Thanks girl! I will post mine on Tuesday. Casey at HASAY is having me as a guest on Monday...I think.

Why thank you Kat that's lovely and especially now I can see it almost instantly now my pooter is all better.

I know, we aren't good with cup holders. I am always amazed by the number you have hidden away under seats, in little pop out places etc in your cars.

The toilet flush this is because we care about the environment more than you do. Even to the point of not wasting water in the loo!

Oh and I have reciprocated your award with one of my own that little Alexander drew for me.

Hahahahahahaha! (I was just playing that hampster game) Hahaha! Love it!
I love random posts.
Don't they have to four-cup-holder things at the drive-through that they can give you?

Isn't that funny, no cup holders and yet in the states they make proud statements in their ads that they have "tons" of holders in their cars.

Thanks for the lesson in English law.

You said "hamster balls"! No cup holders is almost as bad as useless cup holders. Oh, and the pushbutton toilets don't freak me out as much as the self-flushers. Those annoying things scare me every time.

Buttons on the toilet....brilliant!!! Wonder if two year olds would be enthralled with the buttons as much as they are with the handle?? I'm guessing yes. Thank you so much for the award, after a miserable week, I am definitely appreciative. I'm still in awe of your British transplant. Me, I practically hyperventilate when I go to an unknown restaurant, let alone A COUNTRY.

It's Monday and I'm back! And thanks! And, you're awesome?

Hamsters are worthless pets, in my opinion.