"Will You Accept A Collect Call From Hell?"

So I am officially moving today! I have handed over the reigns to Captain Dumbass from over at Us and Them. He is a fantastic blogger and one of the first people who started reading and commenting over here at 3 Bedroom Bungalow. When I was thinking of guest bloggers to help me out during the move, he was one of the people at the top of my short list. I am so glad he said yes! So help me make the Captain feel at home (Jen take your feet off the coffee table) and please take a min to read through his blog, you won't be disappointed.

So Kat and the 3 Bedroom family are off to England and she's asked me to house sit for a day. Me, a Canadian. From the province of British Columbia. Get it? British? England? Ya, it was lame. I'm scrambling. Kat asked me back in September if I'd like to post and I was all sure, that's two months from now, plenty of time. Now it's November and I'm getting angry emails. "Where's my post, dammit!" Hubby handles bombs for a living, right? Ya, I'll get it done right now.

I'm so envious of Kat and her family. Well, envious in an I'm-not-the-one-who-has-to-
pack-up-my-entire-life-and-ship-it-to-another-continent kind of way, but still envious. I'd love to do it, what an experience! Especially for the girls. I hope they get to travel a bit, not just in England, but over on the continent as well. France is only a short ferry ride or train ride through the Chunnel away and once you're in Paris, well, all the rail lines go into Paris and everything is so close together there. From a North American point of view anyway. I remember taking a bus from London to Inverness, Scotland which is almost the length of the country. It took eleven hours. If I drove north from my house for eleven hours I'd barely be halfway through my own province. Oh, and Inverness is where Loch Ness is. Totally peed in the lake. Take that Nessy!

I was in England in nineteen...ninety? Was it '90? It was before the first Gulf War. I remember because Sadam was firing Scud's at Israel and we decided it might be best not to go there. 1990. That was eighteen years ago. Eighteen years, two kids, one marriage and a house ago. Now I feel really old. Gee, glad I could do this post, Kat.

I had such an amazing time in England. Of course our experiences will be slightly different. I was twenty years old, no wife or children and my diet consisted mainly of barley and hops. I didn't have to put a house together in a foreign country with two little girls in tow. Thank goodness she has friends over there already to help, cause they don't even speak English. Sure those cockney accents are funny when you see them on tv, but just try that conversation in real life. I remember being on a bus in Glasgow that had just picked up a couple of drunken soccer fans. Those guys were on the bus for an hour and talked loudly the entire time. Understood one word and one word only. It rhymed with duck. I'm joking, of course. Somewhat. About them speaking not speaking English, not what happened on the bus ride.

Just think about the blogging gold Kat's going to have. The move alone will give her a month's worth of material. Language differences, driving on the wrong side of the road, strange English tv and strange English people. She's so lucky. Take lots of pictures for us, Kat! Oh, and apropos nothing, when you're on an army (navy, whatever) base in a foreign land, how do holiday's work? Do you get to share in that country's holidays? Just wondering because all of my American cyber-friends are talking about Thanksgiving now and it's making me hungry. Ours was last month and it's so long until Christmas. Sorry, sometimes I wander.

Where was I? England! Right. If you're a regular 3 Bedroom reader and aren't familiar with me, you were probably expecting this to go somewhere, maybe a story or two relating to Kat's move or something. Ya, not so much. Oh, and the title? In the middle of Norway there's a little town named Hell. Obviously 'Hell' does not mean the same thing in Norwegian as it does in English, but when I called my mom collect from there (a month or so after I left England) and she answered the phone at 4am on a Monday morning because I hadn't calculated the time zones correctly, I don't think she saw the difference. What did that have to do with the rest of this post? Nothing at all, but it did make for a good title. Alright, I think Kat wants the keys back now. Good luck, Kat! Write it all down. 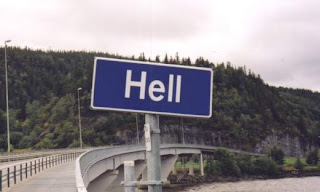 So, Captian Dumbass... Want to feel even older about your trip to England in 1990?

And I'm also wondering how much a collect call from Hell would actually cost. Talk about long distance.

Badass, you're making me feel old! I was just starting high school in 1990.

I'm thinking that a collect call from hell would be free, but the frigin' operator wouldn't be able to understand the number you wanted to dial, thus making you repeat it over and over. It is hell, mind you.

I love that you had the Captain guest post for you. He always has something up his sleeve. This time it was barley and hops and a speaking duck, right?

Loved that I was able to read "cockney" over here. A little dissapointed that I didn't get to read "tube" though. Awesome post!

Thanks for the chuckle, Cap'n. Kat, be safe. Can't wait to have you back!

I wanna go to England! Hell, I'll even go to Canada! My ticket to Hell is already secured..

I'm still wondering if they drive on the left on base. I mean that would be even worse because you'd have to remember to get on the other side everytime you left base. Right der govna?

Barley and hops huh? Did you have any beer?

Well done, Captain. You've set quite an example for the other guest bloggers (ahem) this week...

If I drove north for 11 hours I wouldn't even be in Oregon, let alone another country. Although, if I drove south for 11 hours I would be in Ensenada. So I guess I really don't have a point at all. This is the lamest comment ever. It's kind of like that collect phone call from Hell, horrible, pointless and you can't wait for it to end.

Peed in the lake? NICE!

If I drove 11 hours north from my house, I'd be an hour south of the Michigan college my son has been accepted to. Still in the same state, but barely. And in 1990, I was 27, had been married for 5 years, and already had a kid. How's that for old?

If I ever call the Captain on the phone, I'm going to drive to Hell, Michigan and call collect.