Hi, I’m Ellie from Me and You and Ellie , and I’m delighted to be guest-blogger for Kat while she makes her big move to England. She asked me to write about “moving or traveling”, which is easy: my husband, Mistah and I have spent the last 7½ years traveling around the United States in our German-built (ha!) Volkswagen Vanagon Westfalia “Westy”.

So I wish Kat and her family good luck, and I share a tiny sampling of the joy that German Engineering can bring. 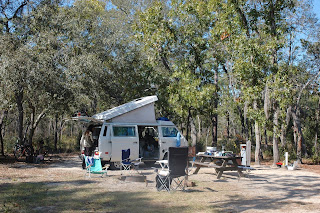 We’ve done about 7 loops around the country in the Westy since we started traveling in the beginning of 2001. Each time, we do things slightly differently, stay in different campgrounds, check out different things depending on the time of year, the weather, what we know, and places we hear about.

But I’m combining 7 cross-country loops into 1 here, and zipping with you from one corner to the next. Maybe I should have called this Southeast, Southwest, Northwest, Northeast?

South. We are always compelled to head south. When we first started traveling it was January, and Connecticut was covered in snow and we arrived warm and happy in the Florida Keys 5 days later. 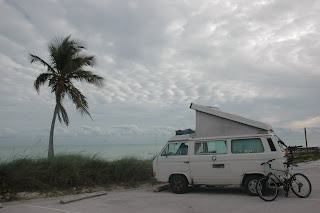 We’ve spent many winters in the Keys – this is Bahia Honda State Park in Big Pine Key. We’ve been volunteers there, so have been able to camp there for 2- or 3-months at a time. I am itching to get back there, as I sit here in my freezing house today….

West. Heading west, we drive across the gulf states, and into Texas. We stop in Fort Davis, of course, a lovely little town where we have a house . . . 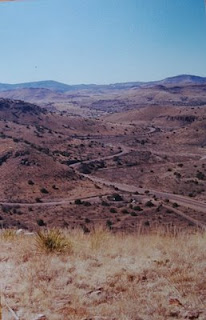 . . . and where we’ve also volunteered at the state park. That’s the Westy, in the photo above: that tiny white dot, where the roads meet. No we were NOT in a helicopter; we were hiking in the Davis Mountains. 5000 feet. In Texas!

Heading further west – we are Americans, after all, and do absolutely believe in the Romance of the West – we pass through the badass states of New Mexico and Arizona, and into California. Aahhh, California. 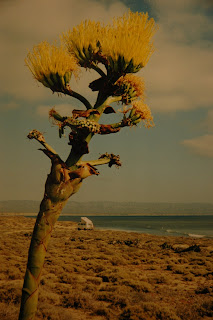 We camp in places like this all the time. No people, no traffic, no distractions, no nothing, except sea and sky and peace. 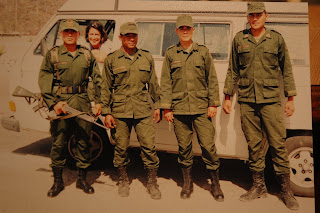 Oh, and these guys. 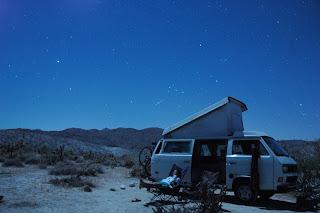 Is there anything better than camping under the stars, with no ambient light, in the warmth? No. No, there is not. 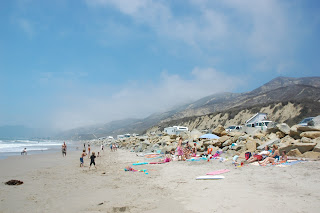 Well, camping right on the coast is pretty great too.

North. Driving up the California coast is one of the most spectacular trips on this continent. The Pacific Coast Highway, Big Sur, the Bay Area. 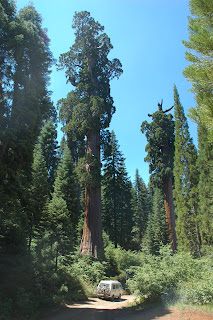 And then, aaaahhhhh. The mysterious grandeur of the Gigantic Sierras. Hang around those trees for a few days, and your attitude about the importance of your place on the planet shifts a little.

East. Heading East – always poignant. But exciting, too, because lots and lots of our peeps live east of the Mississippi, thousands of miles away. And the driving’s good, too, with the sun at our backs all afternoon (hey! These are things you think about after 7 years on the road!) 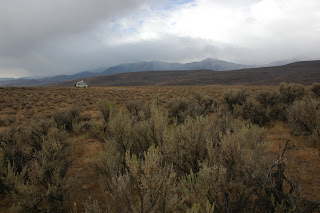 I really love the remote campsites we get, like this one in Nevada, and I just love the fact that Mistah makes the effort to photograph them. 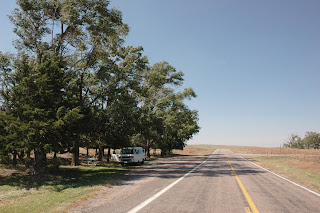 And then over the Rockies and into the heartland. The corn belt. Nebraska (a great place to picnic, clearly), Iowa, Illinois. I love those state. So wide and vast and corn-filled. 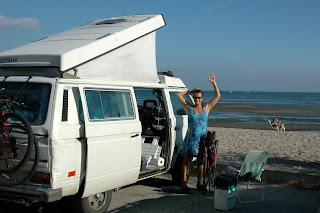 . . . and arrive home (at least for now) in the Nutmeg State. Connecticut.

Is it time to go to the Florida Keys yet?

What an awesome thing to be able to do. I am truly envious.

You need to tell us how you manage to have a life like that. I'd give anything to take off for a few months!!!

That looks amazing. I'd love to do something like that!

Could you babysit my kids for a few months? Not that they wouldn't be adorable to travel with for that long...

Very cool! Not sure I could do it, but I'd like to try some day.

Thanks for the opportunity, Kat! It's fun over here!

Uniforms! Such a controversial issue nowadays, for wholesale electronics more and more schools force their students to wear uniforms every day. When seeing a sea of students all china wholesale with tiring expressions and exactly the same clothes, I can’t help but china electronics wholesale ask, is uniform really a sign of unification as its name suggests? What wholesale do students truly benefit from this “compulsory sense of unity”? It’s indisputable wholesale that middle school students are experiencing the most fascinating period of life, a time china wholesale when the consciousness of beauty should have been promoted. What they really want is a stage to display their individuality and to demonstrate their unique existence, but not to be treated like machinery which was brought about by institutionalization. It’s their unalienable right to choose what to wear and realize their own values within effective guidance, but not to be misled to a wrong conception that being even a little bit different from others is uneasy.Secondly, wearing the same uniform curtails the freedom of these young people.