Anger- Sometimes It Gets the Best of Us

I broke my number one resolution last night. I yelled at LaLa. I had been doing really well with this. It was my top priority. Last night was just one of those nights. The Man has been on a crap shift for the last couple of weeks, and while that is no excuse, it has left me tired and irritable. He only gets to see LaLa on the weekends basically because he is still sleeping when she gets up for school and he doesn't return from work until after she is in bed. This is taxing on LaLa and she tends to act up when she is out of sorts about these things. When he was in Guam she is a mess for weeks until we (I) got her into a solid routine. Needless to say between starting a new school and not having her dad around, things have been a little difficult for the kiddo.

Last night after an hour of asking her to clean her room, I had had enough. Looking back at it now, time out would have worked to fix the situation. Instead, I yelled. It did absolutely no good, the room still isn't clean. I made her go to bed and told her we would deal with it today. I was just too irrate to deal with it at the time.

Today, when she gets home, we are going to try this again. No anger. We are going to get the room clean, eat our dinner, take our baths, and have a little peace in this house. No yelling. Yelling just makes the situation louder, not better. And so help me God if she isn't compliant, her butt is going in time out. 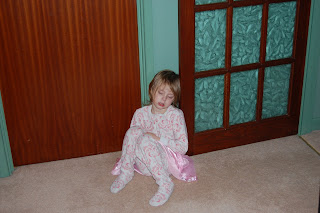 Last time she fell asleep in time out

Reinventing Dad did an Interview Meme over at his place. I asked him the questions and he took the time to answer. Go check it out.
Posted by Kat at 2:07 AM

Don't beat yourself up.
I find myself having trouble w/ my patience level w/ the kiddos I nanny for. That's the point when I send them to their room for "quiet time" so I can regroup my thoughts! ;)

I was given this advice once, "choose your battles,"it really goes a long way when you think about it. On another note, wish you could have heard the total silence yesterday morning when I congradulated your mom about becoming a grandma again...then I said Elizabeast the hussy!!!!

Yes, my dear, it certainly does. (sigh) I really get what you are saying.

Time outs never worked for my kid. Luckily she's grown out of it.

I tell you, sometimes I wish they came with personality directions.
In the end, choose your battles. I fall into the same traps.....

Been there, done that. When Tool Man was gone all the time, and then home for a few hours before having to take off and work Saturdays, it was stressful around the house, and it wasn't until I stepped back after kind of blowing up that I realized the kids were probably stressed, too - because of me and because of their dad being gone all the time. When I would feel on the brink then, I'd step back again and give it a moment to blow over. I'm not saying the room (or whatever) got cleaned, but we all kind of worked together to do a few things and then did something else where we just chilled. It seemed to help.

Hope today has gone well for all of you!

Fear not! I am not damaged and my mother asks me all the time if I am scarred for life! I don't know what it is that she thinks she did...you know, other than not buy me those jelly shoes I wanted, but I am good to go! She thinks she spanked me too much and yelled too much.

Don't worry...if I was ever spanked too much, believe me, I was getting away with more than I was getting caught for, so it evens out. As far as the yelling...well, only Michelle Duggar can do what she does. That is all I gotta say.

Ahh, these things happen. I'm a natural-born yeller, but I find that threats of throwing away his favorite stuff works much better!

I only had to follow through twice, and it's an instant motivator for the boy.

being on your own with the kids makes it SO much harder to keep your cool.. hang in there. :)

Yaya-I try not to, but sometimes when looking back I see the avoidable.

Auntie A- yeah sometimes it is hard to do.

IG- I need a timeout and a nap

kel- apparently me too

MD- LaLa is afeard of the time outs

FADKOG- I feel your pain like you feel mine..long hours suck

Jess- I think I am worried about scarring them too. It isn't like moving all the time isn't traumatic enough, then you have mommy on a rampage too

Lola- It is my natural instinct to yell, I just need to get off my butt but and do some actual discipline.

CPM- It sucks when you feel like a single parent sometimes.

That picture is priceless. I'm not a yeller but I understand where you're coming from.

I can be a yeller too. It's hard. Don't beat yourself up too much, just keep trying.

I only yell to be heard over the anarchy that is four kids! That's my story and I'm sticking to it.

You're right - anger sometimes gets the best of us at all. You have a good plan - tonight will go better.

Totally normal. My voice rises even when my inner voice is telling me to handle it differently. If you go too far with the yelling, it may be nice to apologize.

I hate yelling at my kids. I feel like such an ass when I do. I am not saying that it is a good thing but sometimes, you just need to to release all the tension. But I guess it should not be at the kids. I wish you good luck with getting back on track.

I'm trying very hard to do this one. I was raised with the yelling so it's a tough habit to kick.

WTF? Now I'm talking to you again. How do you do that? If I turn around quick am I going to see a black cat cross my doorway twice in a row? That would be really bizarre because I don't even own a cat.

Well done, momma. You just have to try and use different tactics, I guess.. and with the man being out of the house so often, I can't imagine the industrial strength patience you need. Mister is away travelling, working a lot,but I don't have kids to worry about.. I just have to tell myself to clean my room!

It's extremely difficult. We all do it. Just take it one day at a time. That's what I do. Heck, yelling is nothing! :o)

cleaning your room is exhausting business. As is manipulating your parents :)

Don't be too hard on yourself. I yelled at 30 of my babies yesterday and they're not really even mine! I would do much better calling their parents or kicking them out of the room. I made them stay after the bell today instead of yelling at them. That works every time!

Don't get upset with yourself over it. First of all, she will never remember it. Secondly, it's your God given right as a Mommy to snap every now and again!

It's not easy doing it on your own.

Yelling never worked with my son. Although he'll soon be 15, I still give him 2 choices. He can either do what I ask and we'll all be happy...OR he can ignore me, get a forfeit and have to contend with my sour-lemon-face for the next hour.

It usually works - if you saw my puckered up face, you'd understand.

It's so hard - I have so many mom friends who run into that problem when their husbands are away or working crazy hours for a while - it's hard to basically be a single mom and deal with everything yourself! Don't be too angry with yourself - you're doing your best!

Falling asleep in time out is prescious! Sometimes my dog does that - he's so bad, so I kennel him and then he falls right asleep. It makes me realize sometimes he NEEDS a time out.